London — It has been four years since Princess Diana died in a Paris car crash, yet she is never very far from the news, and her image still graces the nation's newspapers at every opportunity.

In the days before today's anniversary, headlines enticed readers to stories that might just offer a tidbit of old gossip ï¿½ "Secrets Diana Told Me" ï¿½ or shed some light on her relationship with her mother ï¿½ "Missing My Diana." 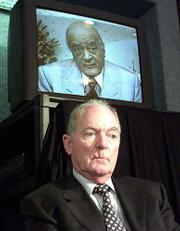 John Macnamara , an adviser to Mohamed Al Fayed, listens to Al Fayed, on video above, at the National Press Club in Washington during a news conference to discuss the Aug. 31, 1997, deaths of his son Dodi Fayed and Princess Diana. Al Fayed repeated his claim Thursday that the deaths were a murder conspiracy.

It hardly seems to matter that the secrets are no surprise and that Diana's mother, Frances Shand Kydd, is writing about her grief and not about her daughter.

Even the posthumous disappearance of Diana's handbags and old pop CDs is enough to make the front pages. The arrest of Diana's trusted butler and confidant Paul Burrell, charged Aug. 16 with stealing hundreds of personal items of the princess and members of the royal family, riveted readers around the country and abroad. Burrell denies the charges and says he never betrayed the princess.

A sober and meaningful commemoration of the princess's life was left to the Diana, Princess of Wales Memorial Fund, which this week announced a $7.2 million project to educate health workers in Africa and help ease the suffering of Africans dying of AIDS and other diseases.

The fund, set up days after Diana's death Aug. 31, 1997, has pledged nearly $65 million to charities this year. Diana's sister, Lady Sarah McCorquodale, is president of the fund, which receives donations and profits from the sale of approved mementos.

As before, the royal family will keep its feelings and its observances private, well outside the public domain where so much of the princess's life was lived.

Prince Charles' office at St. James's Palace says he will still be in Scotland, where Queen Elizabeth II and most of her family spend the month of August at Balmoral Castle.

The plans of Prince William and Prince Harry are not being revealed, but 19-year-old William is likely to be preparing for his first year of art studies at the University of St. Andrews in eastern Scotland.

Prince Harry, a strapping 16-year-old, has been photographed at polo games in the company of a gaggle of teen-age girls but otherwise keeps a low profile.

Prince Charles has brought Camilla Parker Bowles out of the shadows of his life, without noticeably adverse effect.

A recent opinion poll for The Guardian newspaper suggested public acceptance of the match is growing.

The poll, with a margin of error of 3 percentage points, found that 43 percent of those asked said the couple should wed, and 32 percent said they should not.

In August 1998, a year after Diana's death, 46 percent of Britons said they opposed a second marriage for Charles, and only 35 percent approved.

Even Diana's brother, Earl Spencer, said last month he had "nothing against" Charles and that any future marriage was "none of my business."

At the same time he acknowledged that concerns about the upbringing of the young princes, which he had expressed in his widely publicized funeral eulogy for his sister, had been unfounded.

"The two boys have their heads screwed on very well," he told London radio LBC. "I think it's all been fine and they are incredibly well balanced."

For Mohamed Al Fayed, father of Diana's companion in the fatal car crash, Dodi Fayed, the battle to prove their deaths were no accident continues into its fifth year.

Al Fayed, the Egyptian-born owner of Harrods department store, put together a video presentation for the press Thursday in Washington, saying that he was "in no doubt that the deaths were a result of murder with racism at the core" and setting out his allegations in more detail.

Much old ground was covered, but he added that Diana's body had been embalmed within hours of her death and that this was to prevent proper forensic tests in Britain.

A French magistrate's investigation blamed the accident on driver Henri Paul, saying he was drunk. Al Fayed has alleged ï¿½ and repeated Thursday ï¿½ that the driver, who also died, had ties to British intelligence. Former British agent Richard Tomlinson, whose book about the intelligence service was blocked in Britain, supported Al Fayed's allegations in a video presentations.

But French investigators long ago concluded that Henri Paul had no ties to British or any other intelligence agency.