Paul McCartney called him "my baby brother." A fan thought him "quiet and nice and powerful." Musicians and music lovers on Friday mourned the death of George Harrison, the "quiet Beatle" who fit in famously, if not always happily, alongside his more colorful bandmates.

"I am devastated and very, very sad," McCartney told reporters outside his London home. "He was a lovely guy and a very brave man and had a wonderful sense of humor. He is really just my baby brother." 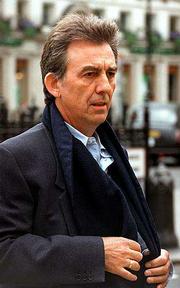 Former Beatle George Harrison, shown in this 1998 file photo, lost his battle with cancer Thursday in Los Angeles. He was 58.

Harrison, at 58 the youngest Beatle, died at 1:30 p.m. Thursday at a friend's Los Angeles home after a battle with cancer, longtime friend Gavin De Becker told The Associated Press late Thursday. Harrison's wife, Olivia, and son Dhani, 24, were with him.

"He left this world as he lived in it, conscious of God, fearless of death, and at peace, surrounded by family and friends," the family said in a statement.

With Harrison's death, two Beatles survive: McCartney and Ringo Starr. John Lennon was shot to death by a deranged fan in 1980.

The Beatles were four distinct personalities joined as a singular force in the rebellious 1960s, influencing everything from hair styles to music. Whether meditating, dropping acid or sending up the squares in the film "A Hard Day's Night," the band inspired millions.

Harrison's appeal was hard to define. He wasn't the cleverest Beatle; that was John. Paul was the cutest and Ringo the most lovable. But something about Harrison ï¿½ the mysticism, the quiet competence, even the moodiness ï¿½ endeared him to fans and musicians alike.

Edna McDonald, 49, from the Welsh mining town of Llanelli, recalled seeing the Beatles perform in Bristol, England, as a teen-ager. While her friends chose Paul McCartney as their favorite Beatle, she said she was drawn to Harrison.

"He was quiet, different from the others," McDonald, vacationing in New York, said softly at Strawberry Fields, a Lennon tribute site in Central Park. "I respected him more for that. I was always influenced by how he was a silent partner but had a lot of influence on the group. It showed me that you could be quiet and nice and powerful at the same time."

Ayessa Rourke, 43, a giraffe keeper at the Los Angeles Zoo, brought roses and wiped away tears at the Beatles star on the Hollywood Walk of Fame.

"He was just a lovely person and a great example of what a human can do, and the great things we are all capable of," she said.

As the news of his death spread, radio stations played music by the Beatles and by Harrison, and fans grieved. They gathered at Strawberry Fields and left bouquets and tributes at the gate of Harrison's 19th century Gothic mansion in Henley-on-Thames in England.

But Harrison never cared for all the attention. He preferred being a musician to being a star, and soon soured on Beatlemania ï¿½ the screaming girls, the hair-tearing mobs, the wild chases from limos to gigs and back to limos. Like Lennon, his memories of the Beatles were tempered by what he felt was lost in all the madness.

"There was never anything, in any of the Beatle experiences really, that good: even the best thrill soon got tiring," Harrison wrote in his 1979 book, "I, Me, Mine." "Your own space, man, it's so important. That's why we were doomed, because we didn't have any. We were like monkeys in a zoo."

Still, in a 1992 interview with The Daily Telegraph, Harrison confided: "We had the time of our lives: We laughed for years."

Peers enjoyed his company. He was close to Eric Clapton, Bob Dylan, Tom Petty and Jeff Lynne. He spoke warmly of hanging out with Dylan and The Band in Woodstock in the late '60s, away from the games and grudges that helped bring the Beatles down.

When he and buddies Dylan and Petty formed the Traveling Wilburys in the late 1980s, Harrison seemed to rediscover what he once loved about the Beatles: a gathering of friends committed to music and carefree about individual glory.

Harrison wasn't a guitar hero like Clapton or Jimi Hendrix ï¿½ that wasn't what the Beatles stood for. But his work, modeled on Chuck Berry and Carl Perkins among others, was essential.

He often blended with the band's joyous sound, but also rocked out wildly on "Long Tall Sally" and turned slow and dreamy on "Something." His jangly 12-string Rickenbacker was featured in "A Hard Day's Night" and helped inspire the Byrds, who used the instrument on their groundbreaking, folk-rock hit "Mr. Tambourine Man."

Although his songwriting was overshadowed by the great Lennon-McCartney team, Harrison did contribute such classics as "Here Comes the Sun" and "Something." He also taught the young Lennon how to play the guitar.

Life after, before the Beatles

After the Beatles broke up in 1970, Harrison had sporadic success. In addition to "The Traveling Wilburys," he organized the concert for Bangladesh in New York, and produced films that included Monty Python's "Life of Brian."

Harrison was born Feb. 25, 1943, in Liverpool, one of four children of Harold and Louise Harrison. His father was a former ship's steward and a bus conductor.

At 13, Harrison bought his first guitar and befriended Paul McCartney at school. McCartney introduced him to Lennon, who had founded a band called the Quarry Men ï¿½ Harrison was allowed to play if one of the regulars didn't show up.

As the Beatles evolved from grinning moptops to "serious" musicians, so did Harrison. He became interested in the sitar while making the 1965 film "Help!" and introduced it to a generation of Western listeners on "Norwegian Wood," a song by Lennon from the "Rubber Soul" album. He also began contributing more of his own material.

Among his compositions were "I Need You" for the soundtrack of "Help"; "If I Needed Someone" on "Rubber Soul"; "Within You, Without You" on "Sgt. Pepper"; and "While My Guitar Gently Weeps" on the White Album.

Late in 1966, after the Beatles had ceased touring, Harrison went to India, where he studied the sitar with Ravi Shankar.

In 1967, Harrison introduced the other Beatles to the teaching of the Maharishi Mahesh Yogi, and all four took up transcendental meditation. Harrison was the only one who remained a follower.

Off on his own

By the late '60s, Harrison was clearly worn out from being a Beatle and openly bickered with McCartney, arguing with him on camera during the filming of "Let It Be."

As the Beatles grew apart, Harrison collaborated with Clapton on the song "Badge," performed with Lennon's Plastic Ono Band and produced his most acclaimed solo work, the triple album "All Things Must Pass." The sheer length of that 1970 release confirmed the feelings of Harrison fans that he deserved better than his supporting role in the Beatles.

But one of those songs, the hit "My Sweet Lord," later drew Harrison into a lawsuit, which he lost, by the copyright owner of "He's So Fine."

A second Harrison project led to legal problems. Moved by the starvation caused by the war between Bangladesh and Pakistan, Harrison in 1971 staged two benefit concerts in New York and recruited such performers as Starr, Shankar, Clapton and Dylan.

Anticipating such later superstar benefits as Live Aid and Farm Aid, the Bangladesh concerts were also a cautionary tale about counterculture bookkeeping. Although millions were raised and the three-record concert release won a Grammy for album of the year, allegations emerged over mishandling of funds and the money long stayed in escrow.

Despite the occasional hit single, including the Lennon tribute song "All Those Years Ago," Harrison's solo career did not live up to initial expectations. Reviewing a greatest-hits compilation, Village Voice critic Robert Christgau likened him to a "borderline hitter they can pitch around after the sluggers (Lennon and McCartney) are traded away."

Harrison's family life was steadier. He married Olivia Arias in 1978, a month after Dhani was born.

The next year, he founded Handmade Films to produce "Life of Brian." He sold the company for $8.5 million in 1994.

Fame continued to haunt Harrison well after his days with the Beatles. In 1999, he was stabbed several times by a man who broke into his home. The man, who thought the Beatles were witches and believed himself on a divine mission to kill Harrison, was acquitted by reason of insanity.

But fame also continued to enrich him. The following year, he saw a compilation of Beatles No. 1 singles, "1," sell millions of copies.

"The thing that pleases me the most about it is that young people like it," Harrison said in an interview with the AP. "I think the popular music has gone truly weird. It's either cutesy-wutesy or it's hard, nasty stuff. It's good that this has life again with the youth."