THE MAG: 'G' is for goodbye

This was supposed to be a humorous column. Garth Brooks just released his latest CD, "Scarecrow," and the 800-pound Gorilla of Nashville's Music Row ï¿½ he of too-tight jeans and too little hair under that 10-gallon Stetson ï¿½ usually makes good target practice. With his aw-shucks posturing belying an almost maniacal behind-the-scenes control of his career, it's like the gazillionaire good-old boy is just asking for a ribbing by still trying to pass himself off as a regular joe from Yukon, Okla.

But the only feeling I can muster is one of pity. 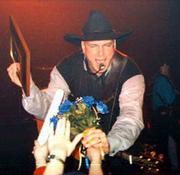 Back in the late 1980s, Brooks was starting to break away from a pack of up-and-comers known as new traditionalists. They were artists pledging allegiance to that old-time sound, and vowing to put the twang back into country. Brooks even said his dream was a career similar to his two George idols: Strait and Jones. And though he's achieved plenty of success, if his path holds its current course, Brooks will have failed in that goal. And that's a pity, because it looked for a while like he might just do it.

There is no arguing that Brooks blasted country music's popularity into the stratosphere, single-handedly reviving a sagging industry with his rumbling voice swaggering through certifiable bad-boy anthems like "Ain't Going Down ('Til the Sun Comes Up)" and "Much Too Young (to Feel This Damn Old)." With this material, he was amassing lasting hits like that old possum, George Jones.

In the meantime ï¿½ fueled by youthful memories of Journey and Kiss ï¿½ Brooks launched a stadium extravaganza full of lights and special effects and souped-up sound. (He's still the only country act I've ever seen who regularly smashes guitars onstage.) Selling out stadiums was something his hero, Strait, could pull off. So far so good.

One year Brooks had three of the top four country albums, and was outcharting Billboard heroes like Nirvana. He forced the players in Metallica to ask the question, "What's a Garth Brooks?" when they found themselves being outsold by the pudgy rural crooner.

He was a phenomenon, came the answer.

Brooks penned some monster ballads, including the powerful "The Dance," and the hokey "If Tomorrow Never Comes." He made the groundbreaking (for country) video "The Thunder Rolls," and started picking up Entertainer of the Year honors.

So, why, having reviewed his history, am I sorry for the man? Because I think that when he said he wanted to be like his heroes, what Brooks really desired was an ongoing career spent making meaningful songs. And in that department he's tanked. There is no "He Stopped Loving Her Today" in his musically mediocre future.

Somewhere in the mid-1990s he got bloated, with quirky habits morphing into bad mannerisms. He kept trying to hold onto that good-ol- boy persona, long after the dollars started flowing in. He slipped into amateurish performance habits: the mawkish emotions and trembling lips. By talking so softly about everything with the greatest of gravity it made him look like the hammiest of actors, and the songs suffered. Don't think so? Can anyone but diehard fans name his last five hits? He must have some because he sells millions of albums, but they simply don't stand out.

Along the way, he lost his wife. Then they got back together and had children, and then they got divorced. Another family sacrificed along a career path. Meanwhile, he gained the reputation of being an obsessive control freak, calling the shots for his record company on his "Sevens" CD, and alienating every Nashville executive in the process. Once the Garth wave crested, Nashville wasted no time in ignoring him at awards shows.

Brooks totally ran adrift with his "Chris Gaines" experiment, where he adopted persona as an alt-rocker. The album bottomed out, and so did the movie plans that accompanied it.

Which brings us up to his new release, "Scarecrow." It's selling well. And it's predictably blah. Brooks claims he's burnt out, and retiring early to be a soccer dad for his kids. (Something tells me a nanny is lurking around the corner.) The tours have taken their toll, he also says, and so he's promoting his CD only through three CBS concerts. His original TV event 10 years ago was a rollicking good time, but his first CBS show was a taxing affair.

His soulless concerts and mediocre music are sending Brooks packing. I can't say I blame him, but it's all so un-George ï¿½ Strait continues to crank out hits and perform in stadiums, while Jones is still the smoothest voice in town. Country singers keep touring and recording songs until they die or go to rehab. They don't retire at middle-age. Heck, Jones was just hitting his stride at 40.

But Brooks just put out "Scarecrow," did a few concerts, then headed for home. And as The Mavericks sing, "Ain't That Just a Cryin' Shame?"