San Jose, Calif. — A star Ringling Bros. circus trainer was acquitted Friday of a charge he abused an elephant outside a performance last summer, ending a trial watched closely by animal rights groups.

The jury deliberated for about two hours before clearing Mark Oliver Gebel, 31, whose defense attorney did not call a single witness. Gebel could have faced six months in jail and a $1,000 fine. 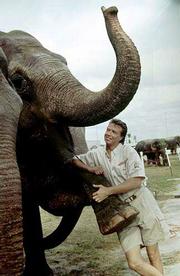 Ringling Bros. and Barnum & Bailey Circus elephant trainer Mark Oliver Gebel poses with the elephant Asia in this undated file photo. A California jury on Friday found Gebel innocent of using a hooked stick to open up a bloody wound on Asia's left front leg in an incident last summer.

The case was important to animal rights groups that for years have accused Ringling Bros. and other circuses of using a wholesome front to mask their cruel treatment of animals. Few criminal charges against circus performers have resulted, however.

Ringling Bros. and Barnum & Bailey owner Kenneth Feld, who sat through the trial alongside Gebel's mother, portrayed the case as a desperate attempt by anti-circus extremists to tarnish the company's reputation.

Because of Gebel's famous heritage, he also was about as prominent a defendant as the circus world could produce. His father, who died in July, was a Ringling star for 21 years.

Gebel allegedly used a straight prong on a hooked stick known as an ankus to jab an elephant named Asia, who was moving too slowly into a performance on Aug. 25 in San Jose.

In his closing statement Friday, defense attorney James McManis said the witnesses are animal rights activists who were desperate to find evidence to support their opposition to circuses.

In 1999, the same witnesses said they found evidence of puncture wounds and abrasions on seven Ringling elephants performing in San Jose, but prosecutors said there was no way to determine whom to charge.

In the latest case, the defense argued the witnesses didn't do much to thoroughly examine Asia and had no proof the stain they saw was blood.

Even if Gebel had accidentally poked the elephant, McManis argued, Asia suffered the equivalent of a paper cut or a pinprick.

"Would a similar 'injury' to a human being result in a criminal prosecution keeping us occupied all week?" McManis told the jury Friday.

Prosecutor Carolyn Powell said the witnesses were merely doing their jobs and are not dogmatic activists. All state law requires, she said, is that she prove Gebel disciplined Asia with punishment that broke the elephant's skin.