Familiar faces of war coverage coming home for the holidays; replacements in place

This year, the Christmas holiday coincides with a work-shift change for the cable and broadcast news staffers covering the war in Afghanistan.

Some of the familiar faces of the war coverage ï¿½ Fox News Channel's Geraldo Rivera, CNN's Christiane Amanpour and MSNBC's Ashleigh Banfield ï¿½ are headed home at a time when the hunt for Osama Bin Laden has intensified. 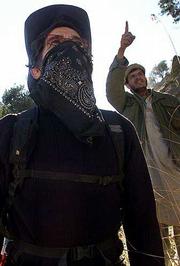 Fox network television correspondent Geraldo Rivera, wearing a bandana over his face to protect himself from dust, walks with an Afghan anti-Taliban fighter. With the holidays upon us, networks are changing their war correspondent lineups to allow on-the-scene reporters like Rivera to take a break.

For the most part, the next wave of on-air correspondents will cover the war through late January, executives said.

Many of the replacements arrived in the region a week ago.

Network executives said they will rotate reporters in the region every four to seven weeks to relieve them from a grueling schedule and let them see their families before they're sent back.

"When you're there, reporting from location, you might be living without running water, without clean clothes and living in a tent, so life can be miserable," said Dennis Murray, Fox News Channel's daytime programming chief. "We try to let some reporters come home so they can be refreshed, and we'll bring in new reporters to continue our coverage."

A mother of two, Bowers arrived in the region last week and expected to spend Christmas at the newly installed Marine Corps base at Kandahar.

"I wanted to contribute to our coverage of the story, but I'd asked not to go right away because my husband is a photojournalist who was deployed to New York shortly after the terrorist attacks on Sept. 11," Bowers said.

Similarly, ABC News correspondents Bob Woodruff and Jim Wooten will take time off during the holidays while reporter Bill Blakemore will report from Islamabad, Pakistan, and parts of Afghanistan.

Blakemore said he'll focus on following the hunt for Bin Laden, suspected of plotting the Sept. 11 attacks, and the new Afghan government.

From now through January, NBC News' Marina Fazel, an Afghan citizen, will report from various points in Afghanistan, along with NBC's Chip Reed.

NBC's Jim Avila, Kevin Sites and Ned Colt already have been reporting from Jalalabad, Afghanistan, and Keith Miller will be based in Quetta, Pakistan, for the month.

"We were braced for the worst-case scenario on stories like this one that tend to run on a long time," said David Verdi, NBC's executive director of news.

"I think we've been surprised at how quickly the Taliban government fell and the al-Qaida forces folded, but we're not letting our guard down," Verdi added. "This story is not over."