By By Judith Graham - Chicago Tribune

Everything about "A Christmas Carol" is familiar, it seems. The miserly Scrooge. The procession of ghosts. The holly and mistletoe, the Crachit family's pudding.

And yet, who can read this beloved story this year without feeling a sense of discovery at the final scene featuring the Ghost of Christmas Present? 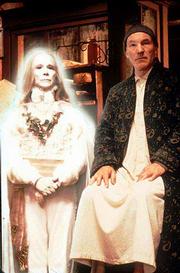 Joel Grey is the Ghost of Christmas Past and Patrick Stewart is Ebenezer Scrooge in a recent TV version of Charles Dickens' "A Christmas Carol." Dickens' lesson on the consequences of ignoring those less fortunate is as relevant today as it was when the story was published in 1843.

The enormous, boisterous ghost has aged during the evening he's spent with Scrooge, his hair turned gray. All night, the two have visited one venue of joyful celebration after another.

At last, they stand alone and the ghost brings forth two children from his robes, "yellow, meagre, ragged, scowling, wolfish." An awful sight, especially after the abundant merriment of the evening.

Scrooge starts back, not knowing what to say. "Spirit! Are they yours?" he asks.

"They are Man's," the Ghost of Christmas Present replies. "This boy is Ignorance. This girl is Want. Beware them both, and all of their degree, but most of all beware this boy, for on his brow I see that written which is Doom."

Yes, how well we know now ï¿½ after the world-altering events of Sept. 11 ï¿½ that we turn away from those less fortunate at our peril.

And yes, these unfortunate children live today, in Afghanistan and all over the world, in poverty, hunger and dire need of help ï¿½ their misery a threat to the regions where they live and the entire world. Only bitterness, anger and destruction can come from such neglect.

Dickens understood these children all too well. As a boy, after his father was thrown into a debtors' prison, he went to work in a factory of brutish conditions he never forgot. His own hopes for education dashed, he knew what it was like to be young and defenseless, to see dreams disintegrate, hope disappear.

All his life, the great English writer sympathized with the poor, especially destitute children, whose agonies he thought adults little appreciated.

Spirit of the season

Surely, there is a great irony in what has been made of Dickens' story, written in less than six weeks in the fall of 1843 amid a frenzy of inspiration.

The subject of numerous movies and plays since its publication, the slim book put Christmas on the modern map as the embodiment of a family holiday, filled with a humanistic sense that it is our right, indeed our obligation, to spread happiness.

No church teachings here. No proselytizing about the Virgin Birth. Buy the big turkey, roast the chestnuts, play games, deliver presents, hug your neighbor and all will be well. This is what we seem to have heard Dickens saying.

Even in the now-unabashed commercialism of the season, there has been little about "A Christmas Carol" that made us pause and wonder.

Stingy like Scrooge? Not we, the consummate consumers, with our charge cards ever ready. Mean-spirited? But we give to charity. Self-absorbed? We do think of others ï¿½ what about all those parties?

Was this all that Dickens meant when he warned us to mind Want and Ignorance or suffer the consequence? Or to be left as Jacob Marley, Scrooge's former business partner, is when he confronts Scrooge in his bedchambers, moaning: "Mankind was my business. The common welfare was my business; charity, mercy, forbearance, and benevolence, were, all, my business."

Surely not. Dickens was a man who relished pleasure and would have been glad to see the traditions of partying and kindness that his story helped inspire persist many years later.

But he had a broader vision.

The times in which Dickens lived were a period of sharp dislocation. Industrialization was overtaking England, turning it from a mostly rural economy into the sweatshop of Europe. Farm work and piece work were being replaced by factory work, whose mechanized routines broke men's spirits. The jobs were simple enough that children did them, for less pay but under equally grueling conditions as adults.

Urbanization was throwing people together in cities of squalor. Between 1750 and 1850, the population of Great Britain and Ireland tripled, soaring from 10 million to 30 million. In 1785, there were three cities with more than 50,000 people outside London in England and Scotland; in 1855, there were 31, according to a "History of the Modern World," by R. R. Palmer and Joel Colton.

Political economists warned of the dangers of overpopulation, noting that it would tax social resources. The free market had its own irrefutable logic, they argued. Wages would sink as low as the market would bear; the poor would stop multiplying when it was no longer in their self-interest to do so. The economy was more powerful than national interests alone; free trade should reign worldwide.

The poor were treated abominably. The Poor Law of 1834 forced the destitute who sought help into group homes, where they had to work for room and board. Abuses were widespread, leading to "shameful cases of disease and death from destitution that shock the Public and disgrace the country," Dickens wrote.

Not long before he wrote "A Christmas Carol," Dickens became particularly concerned about children who labored under terrible conditions.

Struck hard by the first report of the Commission for Inquiring into the Employment and Condition of Children in Mines and Manufactories (1842), the author traveled to Cornwall on the coast to see the mines. A 1843 report and a visit to schools for poor children in London known as "ragged schools" only strengthened his resolve to write about the horrible situations he had seen.

But writing a political pamphlet, Dickens' original plan, proved not to be his calling. After speaking to a charitable institution in Manchester in October 1843, Dickens conceived the idea of "A Christmas Carol" on his return home, as a way of picturing the corruption that wealth can bring and appealing to men to open their hearts to the poor. The book was completed by mid-November.

Dickens may have had an "inkling" of this inspired creation earlier in the year, when he wrote to a friend and indicated plans to set aside the pamphlet and take another tack, according to "The Annotated Christmas Carol," with notes by Michael Patrick Hearn.

Certainly, "A Christmas Carol" has had an impact. Generations have been touched by the story of Scrooge's conversion and Tiny Tim's endearing courage. We are better people for it, every one. Especially if this year we pause to think about Want and Ignorance, which have not disappeared, and what they mean to the world we live in.