By By Nancy Imperiale Wellons, The Orlando Sentinel

After 300 years of silence, Tabitha the witch is spilling the beans on the twisted town of Harmony.

Her memoirs, "Hidden Passions: Secrets from the Diaries of Tabitha Lenox," went on sale last week across the nation, forcing Tabitha to flee the anticipated wrath from her townsfolk in the seemingly sleepy New England burg. 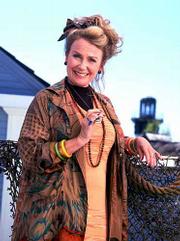 Just one catch: Neither Tabitha nor her town is real.

They're characters on "Passions," the NBC soap opera where teens are possessed by demons, proms are disrupted by tidal waves and talking dolls sip martinis.

The show's latest stunt ï¿½ persuading major publisher HarperCollins to put out a book written by a fictional character, and then shamelessly plugging it nearly daily on the air ï¿½ is pure "Passions."

But it's also an illustration of how daytime dramas are fighting for survival. Outrageous on-camera antics and savvy off-camera marketing are aimed at boosting an audience that has been on a downhill slide for more than a decade.

"We've got to make noise," said Sheraton Kalouria, NBC Daytime senior vice president and former ABC soap marketing wunderkind. "I'm asking for my audience's most valuable asset ï¿½ their time. We've got to use every trick up our sleeves."

It's old news that the original audience for soaps, the 1950s housewife staring at the screen between loads of laundry, has vanished.

Many soaps try to capture a younger audience of 18-plus ï¿½ a group with the buying power desired by advertisers. One study commissioned by ABC found that if viewers don't develop a taste for soaps by age 24, they never will.

"The audience changes with every generation, as we know, but it's changing at lightning speed now," said Felicia Minei Behr, senior vice president of ABC Daytime. "We are definitely trying to keep pace. We know the traditional ways are no longer viable. We try every day to eliminate the concept that it's just my mother who watches soaps."

ABC has been a leader in harnessing the power of the Internet with rich show Web sites and interactive gimmicks such as last year's online contests to choose one character's wedding dress and the father of another's baby.

The alphabet network also is adept at trotting its stars out at promotional tours and the annual Super Soap Weekend at Orlando's Disney-MGM Studios, which this year drew 32,000 fans to the park, Behr said. Next month the network, owned by Disney, opens a Soap Opera Bistro, an upscale eatery at Disney's new California Adventure theme park that will be adorned with soap sets and memorabilia.

"We know people have very tight schedules," Behr said. "We've tried to bring to the audience all different ways of accessing our shows."

That includes repeating shows at night on SoapNet, the 24-hour soap network that turns one year old this week. SoapNet airs same-day repeat shows of ABC soaps "All My Children," "General Hospital," "One Life to Live" and "Port Charles."

Airing soap repeats at night, or having them available online someday, would help secure a larger audience.

It would also eliminate a major gripe among fans ï¿½ the interruptions for so-called "breaking news." Soaps are often pre-empted, with key plot developments blathered over and never seen again.

"It's a frustration for all of us," said Linda Susman, editor of Soap Opera Weekly. "Certainly, if there's a huge explosion, or some really important news, that's one thing. But when you're waiting for something to happen, and then they cut away for news, and you miss it, that's a very sad thing for a viewer."

Longtime fans also can be aggravated by the modern tendency to fill soaps with younger, less experienced actors, to attract younger viewers. They want to tune in and see the veteran actors they've known.

"You have your core audience, and you don't want to turn them off," said Ed Scott, longtime executive producer of CBS' "The Young and the Restless." "You have to do the balancing act. We're doing it pretty well."

Indeed. "Young and the Restless" has been the No. 1 soap for 628 consecutive weeks ï¿½ that's more than 12 years. Its top rivals, "All My Children," "General Hospital" and "Days of Our Lives," do battle each week to grab the lion's share of the younger audience ï¿½ the networks reportedly throw parties whenever they hit the top in a demographic like teens or women.

But "Y&R" remains the overall ratings leader, with an average weekly audience of more than 6 million.

"What we do for a living is drama and story. We want people to watch our fables."