The Takacs Quartet, one of the world's leading string quartets, will perform at 3:30 p.m. Feb. 11 at the Lied Center. 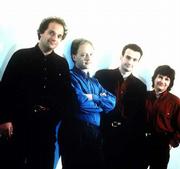 The Takacs Quartet is known throughout the world for its classical performances.

The quartet is known for its performances and recordings of Bartok's challenging works. The group received the Gramophone Chamber Music Recording of the Year in 1998 for its recording of the Bartok cycle, and in 1999 was nominated for a Grammy Award.

The Takacs Quartet was formed by Gabor Takacs-Nagy (for whom the ensemble is named), Schranz, Gabor Ormai and Fejer in 1975, when they were students at Budapest's Liszt Academy in Hungary.

The quartet made its North American debut in 1982, and has since performed at the Lincoln Center, Carnegie Hall and the Metropolitan Museum in New York.

Since 1983, the quartet has held a residency at the University of Colorado-Boulder.