Washington — At a reception for publishers of scientific and academic journals, Patricia Schroeder waved her hand toward several dozen egghead types who were partying at the Corcoran Gallery of Art ï¿½ dining on shrimp kebabs, wining on not-too-shabby Chablis.

"They're terrified," she said. 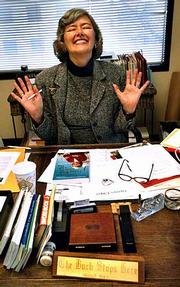 As head of the Association of American Publishers, Pat Schroeder is ready to take on librarians over the free use of e-books and journals.

She ought to know. Schroeder is president of the Washington- and New York-based Association of American Publishers, sponsor of the event. And who, you might be wondering, is giving Schroeder and her publishers such a fright?

Of all the dangerous, dot-complex problems facing American publishers, perhaps the most explosive one could be libraries.

Publishers and librarians are squaring off for a battle royal about the way electronic books and journals are lent out from libraries and what constitutes fair use of written material.

Grossly oversimplified: Publishers want to charge people to read material; librarians want to give it away.

"We," said Schroeder, "have a very serious issue with librarians."

With her squinting, smiling, you've-just-got-to-understand expression and her crinkly-caring voice, Schroeder is the publishing world's latest best hope. Her hair is silver. Her eyes are sparkly. She is a woman on a mission.

"Technology people never gave their stuff away," Schroeder said. "But now folks are saying, 'You mean the New England Journal of Medicine is charging people?' "

Publishers must figure out a way to charge for electronic material, Schroeder said. "Markets are limited. One library buys one of their journals," she explained, pointing to the Brie eaters. "They give it to other libraries. They'll give it to others."

If everyone gets a free copy, the publisher and the writer and others involved in making the book go unpaid. "These people aren't rich," she said. "They have mortgages."

American publishers are on the edge of a revolution.

They see the music and film industries struggling to adapt to change. They want to avoid the Napster monster: technology that makes copying and distribution of e-books free and easy.

She worries about protection of intellectual property. She wants writers and publishers to make money. She puzzles over secure ways to deliver electronic books. She's adamant that the country needs to focus more on reading to children under age 5. And she's concerned about citizens' rights to free speech and privacy.

Publishers are trying to hang on to profits as technology makes it easier to duplicate their works.

"Libraries have spent all this money on technology," Schroeder said. "They don't have any money left for content."

"The reason we're in a bind," Kranich said, "is that the price of some of the materials has skyrocketed, without any explanation." She cited one chemistry journal that costs $14,000 a year.

In principle, librarians think patrons should have free and easy access to all information.

In Kranich's mind, library-goers should be able to duplicate limited amounts of information for educational purposes.

Suppose you want to copy a journal article, quote part of a book or use a line from a poem, she said. "That is all permitted under the fair-use provision of the copyright law. In the digital arena, fair use has been narrowed to the point of disappearing.

"The publishing community does not believe that the public should have the same rights in the electronic world," Kranich said.

The AAP is looking for ways to charge library patrons for information. "Politically," Schroeder said, "it's the toughest issue. Libraries have a wonderful image."