Six Kansas University students and KU theater professor Jack Wright later this month will be heading to Belgium to perform "An American Medley," a series of one-act plays, at an international theater festival. 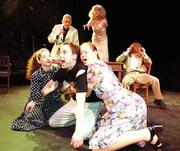 "I'll be teaching some acting workshops, and it will be an opportunity for the students to see productions from other countries," Wright said.

Lawrence audiences will get a chance to see "An American Medley" before it crosses the Atlantic. The one-act plays will share a double bill with a contemporary drama by Edward J. Moore for the upcoming Chamber Repertory Theatre II.

"An American Medley" includes "The Loveliest Afternoon of the Year," a comedy by John Guare, "This Property Is Condemned," a drama by Tennessee Williams, "Time Flies," a romance by David Ives, and "Desire, Desire, Desire," a parody by Christopher Durang. The series runs Thursday through Sunday in the Inge Theatre in Murphy Hall.

Moore's drama, "The Sea Horse," will be staged Tuesday through Feb. 24 in the Inge, under the direction of Sandi Bailey, a KU graduate student in theater.

Wright said KU student-actors last appeared at the Belgium festival in 1995, when, under his direction, they performed scenes from Shakespeare's "A Midsummer Night's Dream" and Ives' "All in The Timing."

"We've been invited back every year," he said, "but this was the first year we could go."

University Theatre will present a series of four plays and a contemporary drama for Chamber Repertory Theatre II:ï¿½ "The Loveliest Afternoon of the Year," by John Guare, "This Property is Condemned," by Tennessee Williams, "Time Flies," by David Ives, and "Desire, Desire, Desire," by Christopher Durang, 7 p.m. Thursday through Sunday, Inge Theatre, Murphy Hall.ï¿½ "The Sea Horse," by Edward J. Moore, 7 p.m. Tuesday through Feb. 24, Inge Theatre.Tickets are $6 for students, $11 for senior citizens and $12 for the general public.Tickets are available at the Murphy Hall Box Office, 864-3982; Lied Center Box Office, 864-2787; Student Union Activities Box Office, 864-3477; and online at http://www.kutheatre.com.