V is for Violence

Using Valentine's Day as a launching pad, a women's group has claimed the month of February to raise awareness of the abuses women are forced to endure simply because they are born female. Sadly, the "V" often represents violence ï¿½ particularly rape, and it's the goal of groups like the February Sisters Association to change society's tolerant view of crimes directed at women.

Cast Members of "The Vagina Monologues" rehearse at the Hashinger Theatre.

While several events are planned, the centerpiece on campus is a staging of the provocative play, "The Vagina Monologues," with proceeds from ticket admissions going to local support groups.

The one-hour, highly graphic show focuses squarely on women's sexuality, both its pleasures and its sorrows.

The Sisters, in this case, want everyone to know that "V" also stands for vagina, and that it's OK to use the word while trying to understand its cultural significance.

"As soon as you say the word in public, everyone who is talking stops, and there is dead silence," says producer Sharon Sullivan.

There is irony in that statement. While the sexual revolution showed up more than 30 years ago, people in the 21st Century still feel insecure saying "vagina" in public. But that is the initial step needed if people are ever to understand such crimes as spousal abuse and rape.

"The idea is that it's just another part of the body, and that we should not be ashamed of that," says director Julie Depauw.

Birth of an idea

"The Vagina Monologues" is the brainchild of playwright Eve Ensler. It was originally written as a one-woman show in 1996, which Ensler performed to rave reviews. It has been performed live by such noted actresses as Glenn Close, Calista Flockhart, Brooke Shields and Susan Sarandon. One of its strengths lies in its structure. It can be performed solo, or as an ensemble, which is how the KU production will be staged. It's not a technically heavy show, but its words pack a real punch, according to Sullivan.

"It's very low-tech, virtually no-tech. We're trying to put the emphasis on words," she says.

The play pushes buttons, but it also makes people stop and think. If the title alone makes some potential viewers nervous, then so be it, because the February Sisters want to use the edgy drama to get people talking about vaginas and what they represent.

And that is what the play is about. It's about vaginas. It's a series of monologues based on interviews with a diverse group of women. What makes the play so ideal is that it uses equal parts humor and pain in its story line.

"I think there is a definite possibility of it being controversial to some people," says actress Jenny Selig. "Whenever you approach a subject that some people don't talk about, or want to think or hear about, then that's the nature of the beast ï¿½ it's going to make them uncomfortable. But if they come with an open mind, they will be challenged by the show."

The play was cast in December and is made up of 14 undergraduate and graduate students, faculty members and community actresses. They've been rehearsing for the last month to come together in an ensemble effort.

"I wanted to make it a dialogue between the actresses, and between them and the audience. I've tried to create a good ensemble bond," Depauw says.

The audience will hear everything from horrendous stories of Bosnian rape victims to casualties of family sexual abuse, along with an eyewitness description of childbirth and one woman's discussion of her first same-sex encounter.

"It not only brings out the similarities between women, but also the differences," Selig says. "And it's not limited to women. When men come to the play they have a good experience ... if you come and watch it, something said on the stage will hit you."

Humor is used both onstage and off, and it's the performers way of saying that not only should women's sexuality not be abused, it should be celebrated. The play finds laughs in the use of hand mirrors at anatomy workshops, and makes fun of the indignity of a pelvic exam, while offstage there are pre-play events that will feature a poetry workshop devoted to sexuality and a bake sale featuring goodies made up to look like the female organ.

"Part of it should be for men and women to celebrate a woman's sexuality," Sullivan says.

A collection of 14 students, faculty and local actresses comprise the cast of "The Vagina Monologues."

The February Sisters is a KU group based in the Women's Studies department, and it sponsors activities each year to raise awareness of women's issues. It also is an association so that they can raise additional funds and gain sponsorship through the school and the community, as well as being able to join in additional national events. This year more than 60 volunteers from outside the department have joined in promoting various activities.

The focus of the group was to bring the V-Day 2001 College Initiative to the KU campus. That campaign seeks to eradicate sexual violence against women, and focuses on rape, childhood sexual abuse, battery and genital mutilation.

The KU play production is one of 450 being staged across the country during the next two weeks. Sullivan had been focusing on the significance of rape as a tool of warfare, and the initiative's program was a good fit for what she was urging the group to discuss this year.

"Rape has been used since the beginning of time as a weapon of war, and it was virtually unmentioned for centuries ï¿½ until the 1990s when Rwanda and Bosnia brought it to the public attention," Sullivan says. "It's used to dehumanize and demoralize and to make the enemy feel hopeless and helpless."

But the play and other on-campus events bring out that rape is not a faraway crime that only takes place in war zones. Consider these statistics:

ï¿½ In the United States a woman is raped every two minutes.

ï¿½ A rape occurs every 21 hours on a college campus. 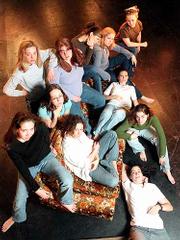 The ensemble cast of 'The Vagine Monologues'.

ï¿½ Women ages 16-24 run a greater risk of being raped than any other population group.

ï¿½ A woman is most likely to experience an assault during her first two months of college.

ï¿½ Boys who witness their fathers' violence are 10 times more likely to engage in spouse abuse during adulthood than boys from non-violent homes.

ï¿½ Fifty percent of homeless women and children are on the streets because of violence in their homes.

ï¿½ Sixty-eight percent of rapes occur between the hours of 6 p.m. and 6 a.m.

ï¿½ Battering is the leading cause of injury to women ages 15-44 in the United States. The FBI estimates only 37 percent of rapes are reported to the police.

Those statistics were staggering to Sullivan.

"On campus, you sort of feel it's a safer climate, but that's not the case" she says.

Representatives from KU Health and Education will be on hand for a post-play discussion. One warning they will focus on is the prevalence of date-rape drugs, such as Rohypnol and GHB, on the KU campus.

"Their use is reported about every week," Sullivan says.

The February Sisters also will sponsor the screening of the documentary film, "Calling the Ghosts: A Story about Rape, War and Women," and a forum, "Sexual Violence as a Weapon of War," featuring speakers such as Anne Barstow and Pamela Schifman.

Barstow is the author of "War's Dirty Secret: Rape, Prostitution and Other Crimes against Women." Schifman is co-executive director of Equality Now.

It also is joining in a national campaign that provides a wireless phone to victims of domestic violence. The "Donate a Phone" campaign refurbishes, reprograms and distributes them to victims in need, so they can have a phone to use in the event of an emergency. Phones are being collected now through Feb. 23 at the Murphy Hall box office.

But by its very name, and its upfront and frank look at sexuality, "The Vagina Monologues" is the device the group is primarily using to focus public attention on some very volatile topics.

"It does address things on several levels. I hope people come away knowing we are all responsible for what happens in society. If we don't like something, we can change it," Sullivan says.

"It's such an amazing play," Depauw adds. "It's the epitome of what theater can do to break down barriers. We say in public what people already know in private."