The story of a boy who doesn't want to grow up will be flyin' into the Lied Center Friday night. "Peter Pan" will start at 7 p.m.

The production, which lasts two hours and 15 minutes, is based on the 1954 Broadway musical version, which has been revived twice on Broadway, in 1979 and in 1991. 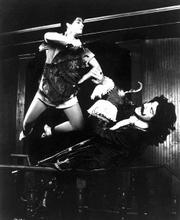 Peter Pan and Captain Hook fight during a scene from the musical "Peter Pan."

Songs included in the show are "I Gotta Crow," "Neverland," "I'm Flying" and "I Won't Grow Up." The show features a cast of 25 and an eight-piece orchestra.

The classic story about lost innocence focuses on Peter Pan's encounter with the three Darling children ï¿½ Wendy, John and Michael ï¿½ and their trip to Peter's home, Neverland. The children's adventures bring them into contact with Tinker Bell the fairy, the Lost Boys, Captain Hook and his pirates, Indians, mermaids and crocodiles.

The musical is based on the novel "The Little White Bird," written in 1902 by Scottish dramatist and novelist Sir James Barrie. There were six chapters about Peter, which he later extracted and published as "Peter Pan in Kensington Gardens." As a play, "Peter Pan," or "The Boy Who Would Not Grow Up," captured the public's imagination. The first production opened in London in 1904.

In September 1979, the production was revived, starring Sandy Duncan, who won a Tony Award for her performance. The show was revived again in 1991 with gymnast Cathy Rigby in the title role.