Los Angeles — Veteran rockers U2 and Steely Dan and country singer Faith Hill stole some of the Grammy spotlight Wednesday from Eminem, whose angry lyrics entangled the ceremonies in controversy.

U2 won three awards, including the prestigious song and record of the year for "Beautiful Day."

"It's a very unique emotion I'm feeling right now. I think it's called humility," said U2's Bono, who said fellow nominee Macy Gray and others should share the band's award. "I'm completely not used to it."

Eminem's performance of his song, "Stan," with Elton John tested the CBS censors. At least three expletives slipped by and were heard on the air.

Eminem ï¿½ the target of 100 protesters outside the awards show ï¿½ was honored for best solo rap performance, best rap album and best rap performance by a duo or group for his collaboration with his mentor and producer, Dr. Dre.

Steely Dan, who will be inducted into the Rock and Roll Hall of Fame, also won best pop album for their first disc in 19 years and won best pop vocal performance by a group for "Cousin Dupree."

"We've been around a long time," said Steely Dan's Donald Fagen. "It's nice to get one of these." 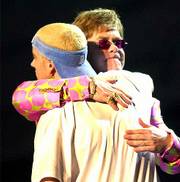 Elton John and Eminem embrace at the conclusion of their duet Wednesday at the 43rd annual Grammy Awards in Los Angeles.

"Wow! ... Oh, I cannot believe this," Hill said. "I would like to thank my mom and dad for allowing me to go to my first concert when I was 8 years old to Elvis Presley."

Eminem's nomination for album of the year for "The Marshall Mathers LP" had drawn the most attention before the show. The album, which has sold nearly 8 million copies, denigrates homosexuals, describes the murder of his wife and has a rape fantasy involving Eminem's mother.

Elton John came under intense criticism from gay activists for agreeing to perform with the 28-year-old Detroit rapper during the Grammy show.

The controversy, and diverse group of nominees, promised to drive up viewership for the annual awards show.

Madonna lost out on the best female pop vocal Grammy; the award went to Gray for "I Try." In fact, the new mother and wife was shut out of the three categories she was nominated in, along with boy band 'N Sync, who had last year's best-selling album with "No String's Attached."

There are 100 Grammy categories this year. Unlike last year, when Santana walked away with a record-tying eight awards, no artist or group was positioned for such a sweep.

Dr. Dre, and the R&B trio Destiny's Child led all nominations with five each. Dr. Dre picked up the honor for best producer in the pre-telecast ceremony.

Two of the fired members of Destiny's Child could have appeared on stage with the now-trio when they picked up their two Grammys, but did not. Lead singer Beyonce Knowles briefly alluded to the group's lineup drama when she thanked replacement Michelle Williams "for blessing Destiny's Child."

Jennifer Lopez, who provided the Grammys' most memorable moment last year with her navel-plunging Versace dress, was not present, but the spirit of her dress was there with Toni Braxton's eye-popping silver Richard Tyler frock. Program host Jon Stewart joked that Braxton was wearing his lost scarf.