Controversial musician to fight Paul Simon, Steely Dan, others for album of year

New York — The record industry showed Wednesday that it could in fact stomach and even stand Eminem.

The rapper's wickedly offensive but critically acclaimed "The Marshal Mathers LP" received four Grammy nominations, including album of the year. He and his mentor, Dr. Dre, who produced the album, received a combined nine Grammy nominations for it and "Dr. Dre ï¿½ 2001." 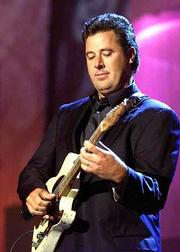 Eminem, whose songs bashed homosexuals and depicted the killing of his wife and the rape of his mother, also had taken a swipe at the academy, saying on the song "The Real Slim Shady": "You think I give a damn about a Grammy?/Half of you critics can't even stomach, let alone stand me."

Michael Greene, president of the National Academy of Recording Arts and Sciences, acknowledged that the nominations would upset some people.

"We're going to catch a lot of flak for this, there's no question, but you've really got to view this in the context of art being a pretty extreme medium sometimes," he said.

Eminem was shut out of the prestigious record and song of the year categories.

Also nominated for album of the year: perennial Grammy favorite Paul Simon, for "You're the One"; Beck for "Midnite Vultures"; Radiohead for "Kid A," and Steely Dan for "Two Against Nature."' Paul Simon has won album of the year three times before and already owns 16 Grammys.

'N Sync, which had the year's best-selling album, "No Strings Attached," garnered just two nominations. One was for record of the year, for "Bye Bye Bye." Other nominations in that category include Destiny's Child's "Say My Name"; "Beautiful Day" by U2; "I Try" by Macy Gray; and "Music" by Madonna.

Madonna, who has never won a Grammy in a major category, also was nominated for female pop vocal performance and pop vocal album. 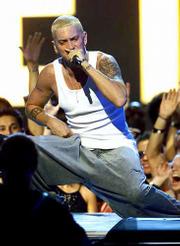 Rapper Eminem received four Grammy nominations Wednesday, including album of the year for "The Marshall Mathers LP," a work that has enraged some listeners but won critical acclaim.

Country singer Faith Hill, whose "Breathe" was the top single of 2000, received four nominations. Vince Gill also had four, including best country album for "Let's Make Sure We Kiss Goodbye."

Nominees for best new artist were country singers Shelby Lynne and Brad Paisley, rock-rap act Papa Roach, R&B chanteuse Jill Scott and Sisqo, who had one of the year's biggest smashes with the raunchy "Thong Song."

Britney Spears, one of the year's leading album sellers, was nominated for pop vocal album for "Oops! ... I Did It Again" and female pop vocal performance for the song of the same name, but was snubbed in the major categories.

Eminem was nominated for rap album, rap solo performance, and rap performance by a duo or group for his collaboration with Dr. Dre on "Forgot about Dre." But his song "The Real Slim Shady" was bypassed in the record and song of the year categories.

Eminem, who declined comment Wednesday, had already won two Grammys for his debut album, "The Slim Shady LP." "The Marshal Mathers LP" drew widespread critical acclaim, as well as controversy, with its witty yet demented lyrics.