Side Notes: Tolerating the intolerant

I received an interesting e-mail about a week ago, a virtual petition "in support of the act to NOT support the National Academy of Recording Arts and Sciences' Grammy Awards by NOT viewing their annual awards show on February 21st."

The petition went on to explain that the rapper Eminem has been nominated for several Grammys and that his "presence at this annual awards show CLEARLY PROMOTES HOMOPHOBIA and also highlights the NARA's inability to say NO to corporate greed." (Unlike all those benevolent, socialist corporations, apparently.) The e-mail then cited several lyrical passages from Eminem's "The Marshall Mathers LP" and finished with stating that by signing this petition "I refuse to support the (NARA) and their promotion of bigotry to 100 million people around the world. You can count on me to not support homophobia in any form." 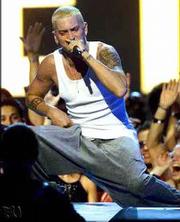 I was asked to sign the petition and forward it to as many people as possible. Instead, I forwarded it to my computer's trash can.

Alliances against various forms of rock and its many offspring have been around nearly as long as the music itself. The FBI kept files on Elvis Presley during the '50s, concerned that he would corrupt America's youth and turn us all into communists. Tipper Gore's Parents Music Resource Center paved the way for Senate hearings over the content of rap and heavy metal in the '80s and brilliant political orator/spelling bee genius Dan Quayle spoke out against Tupac Shakur and Sista Soulja in the '90s. That people put so much power in the hands of rock and rap does underscore the vital role that music plays in our lives; but what real gains come from boycotting the Grammys?

The e-petition asserted that "Eminem uses the word 'fag' or 'faggot' 13 times in 18 songs." I hate to break this to whoever authored the piece but I could probably find some albums that contain those words 13 times in a single stanza. Granted, those words aren't tolerant or kind, but my point is that Eminem is hardly the first artist to invoke them. To say that "homophobia will not be tolerated in any form" is a joke in light of the fact that it has been tolerated for so long in so many forms.

There was little in the way of serious public outcry when Public Enemy, Dr. Dre, Tupac, Ice Cube, Eazy-E and hosts of other rappers used similar words and images. Concern and outrage was absent when Korn released a song titled "Faggot." The band Dire Straits wasn't raked over the coals for making fun of "the little faggot with the earring and the makeup" in its mega hit "Money For Nothing?" Petitions weren't circulated against comedians like Eddie Murphy, who used blatantly homophobic material in their act. Comedy troupe Kids In The Hall has a routine called "Running Faggot" complete with theme song, yet its television show was critically lauded.

Hundreds of movies have contained stereotypical portrayals of homosexuals, including Oscar winning films "Dog Day Afternoon," "Pulp Fiction" and the acclaimed new comedy "Best In Show." Curiously, there are no petitions for these films. If the same criteria was used on "Queer As Folk," the cable drama would surely be boycotted (or exempt from awards) for its one-dimensional and largely negative take on homosexuality. One of Lenny Bruce's most famous routines is called "Dykes and Faggots," yet he's considered one of our most revered comedians. Are deliberately provocative artists such as Lenny Bruce and Public Enemy "not tolerated" like Eminem or do we grant them freedom of speech and ignore the occasions when they say something with which we disagree?

Most Americans consider freedom of speech an "inalienable right," as our Constitution states, but it's easy to protect the speech of those with opinions similar to ours. A more accurate test of one's belief in the First Amendment is whether they are willing to defend the opinions of those with whom they disagree. Furthermore, there are bigger fish to fry, including Kansas' own Fred Phelps, who goes far beyond mere words and takes real actions against homosexuals. A petition against him would probably do more to lessen the bigotry and hatred that still exists in our supposedly enlightened culture.

Does the media brouhaha and e-petitions draw more listeners to Eminem? You bet. Should Eminem be allowed to say the word "faggot" in his confused quest for artistic freedom and street credibility? Yes.

Bigotry may be reprehensible but censorship is worse.