It's easy to get the impression that Green Day wouldn't do a single thing differently, were they to play the Bottleneck or Arrowhead Stadium. And so it was Friday night at Kansas City's Hale Arena, part of the American Royal complex adjacent to Kemper Arena, where a darned good time was the brass ring, and Green Day and their fans together made up the carnival ride.

Together since the late '80s, Green Day's major label breakthrough came with MTV's heavy rotation of "Longview" from the "Dookie" album. No one could have known at the time, during the heart of the grunge explosion, that they were harbingers of a punk revival with staying power.

All photos by Michael Newman/JW Photo

Along with bands like Rancid, Offspring and The Presidents of the United States of America, Green Day blazed a trail down an overgrown and mostly abandoned path in the junglr of punk rock. Green Day re-popularized a flavor of punk where poppy hooks prevail and liberal doses of youthful angst never obliterate the exuberance of the music.

The band consists of singer and guitarist Billie Joe Armstrong, drummer Tre Cool and bassist Mike Dirnt, who always look as though they appreciate where they are and what they do. Particularly for Armstrong, it appears that fronting a popular band in front of happy people is about the most fun you can have with your axe on.

Hale Arena is a cavernous, airplane hangar of a venue, badly in need of some acoustic engineering. While Kansas City lacks many options for performance spaces bigger than Memorial Hall, and smaller than Kemper, new-kids-in-town House of Blues Productions might want to keep searching for another hall. Never the less, Green Day's fans were able to forget the surroundings and poor sound, and have themselves a fine time.

The crush at the security rail was intense, and the crowd pressed so tightly together that a good mosh pit wasn't possible, so intense, uninterrupted crowd surfing commenced with the opening notes and never abated throughout the performance. 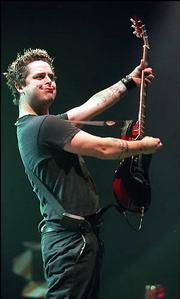 At times kids were coming over the rail so fast and furious that there was a waiting line to get back out from behind the barricade into the house. The seasoned pros with Crowd Systems handled security with aplomb, always behaving as though the safety of the fans was every bit as important as the security of the performers.

The diminutive Armstrong led his band mates through almost two hours of new and old songs including "Blood, Sex and Booze" from their current release "Warning," and classics like "Geek Stink Breath," Hitchin' A Ride," "Welcome To Paradise," "Longview," "When I Come Around," "Macy's Day Parade," and "Basket Case."

"Minority" most especially, from the new album, seemed to resonate with the young audience. Bic lighters were out in force for the worn out "Good Riddance (Time Of Your Life)"

A lot of punk rockers give the impression they might have stepped right out of the audience and onto the stage. Green Day goes the implicit symbolism of punk one better. A staple of Green day concerts is the slapdash creation of an impromptu band onstage, made of fans pulled right out of the crowd. 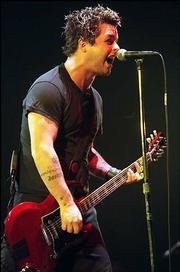 Not leaving too much to chance, Armstrong grilled prospective rockers hardï¿½"How old are you? How long have you been playing? Can your really play??"

In the end he was satisfied with the answers and a 14 year-old guitar player, a 17 year-old drummer, and a twenty-something bassist, with Armstrong himself on vocals became a credible band for about three minutes. Armstrong dubbed the group Kevin and the Kansas City Maniacs and had them each in turn take a flying stage dive back from whence they came.

Onstage Green Day was augmented occasionally by guitarist Jason White and a pair of brass players.

Opening act, Olathe's own The Get Up Kids were the recipients of a well-deserved homecoming embrace from the hometown crowd. They played a high-energy set of emo-rock that at times recalled early Cheap Trick and late Big Star. 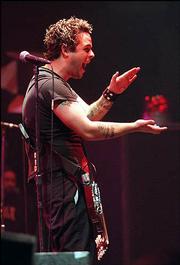