Jo Anne Hargis says the upcoming concert by Troupe Raghsidad is hip and hip-centric: The show mixes Middle Eastern dance with the "shaken but not stirred" music of KANU-FM 91.5's "Retro Cocktail Hour."

"I had been listening to 'The Retro Cocktail Hour' for a while, and they did an exotica show," Hargis, artistic director of Troupe Raghsidad, said. "I called Darrell (Brogdon, KANU program director) with the idea. He sent me a tape of 35 songs. 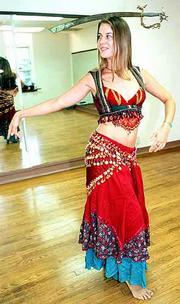 "I brought the idea to the dancers, and they rolled their eyes. They couldn't imagine doing Middle East dance to the songs."

But the dancers began listening to the short songs ï¿½ mostly instrumentals with percussion, horns or strings.

"It was an adjustment for the dancers," Hargis said. "The songs are so short. They're used to developing an idea, but there's not much time to do that. So they have to work with one idea (rather than) six."

Secondly, the familiar rhythms of Middle Eastern music were not there. So the dancers had to really listen to the music to match their movements with the beat.

Although he will not be present, Brogdon's voice will be heard during the "Cairo on the Kaw Meets the Retro Cocktail Hours" concert Saturday and July 15 at Lawrence Community Theatre. Brogdon has recorded his introductions to some of the numbers so that he can be at Kansas State University in Manhattan for the taping of a television show featuring "The Imagination Workshop," KANU's comedy troupe.

"Being there was not an option," he said. "What I do is faceless anyway."

Hargis said the show will open with "Three Little Maids from Damascus," which is from a Mr. Magoo animated movie titled "A 1,001 Arabian Nights." The comedy number will lead into a Gulf or Saudi dance with traditional costumes and movements. Next is three versions of "Caravan," incorporating the use of a milaya, or a dark strip of fabric, a cane and a sword.

The rest of the program includes choreography to the New Age music of Loreena McKennitt; the Gahawazee, a traditional dance from Egypt; a modernized version of a traditional Middle Eastern dance with small steps and hip movements; and "Head Hunter," choreography set to a classic bongo song from "The Savage and the Sensuous."

"It sounds like the theme to some Tarzan movie," Brogdon said.

Troupe Raghsidad was established in 1988-1989 and became a nonprofit organization in 1995. Hargis has been teaching Middle Eastern dance for the Lawrence Parks and Recreation Department since 1989-1990.