New York — Until a Nickelodeon executive attended a diversity seminar one day, the star of an upcoming animated adventure series for preschoolers was a bunny named Benjamin.

After that day of consciousness raising a new heroine was born: Dora, a 7-year-old Latina. 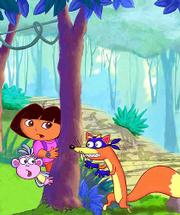 Dora appears with two animal friends in this drawing from the Nickelodeon's "Dora the Explorer," the animated series about the adventures of a Latina girl. Less than a year after its debut, Dora is watched by1.2 million children ages 2 to 5, the most popular television show among viewers of that age group.

"I was just so inspired with the idea of making television where kids can see themselves," said that executive, Brown Johnson. "Latin kids and African-American kids usually don't see themselves on television, certainly not as main characters."

Less than a year after its debut, "Dora the Explorer" is regularly seen each time on the air by 1.2 million children aged 2 to 5. That makes it the most-watched show on television among viewers of that age group.

"Dora the Explorer" airs at 10 a.m. and 10:30 a.m. weekdays on Nickelodeon, where it has improved the ratings in those time slots by an average of 22 percent. The show also airs Saturdays on CBS.

With prime-time television under attack for its lack of minority representation, the most popular character for impressionable toddlers of all ethnic backgrounds is Latin.

Every day, Dora leads her young viewers on an interactive adventure that casually mixes English and Spanish. Dora repeats words slowly, and her young fans are asked to identify items and navigate her journey with a map.

"Will you help us find Pablo's flute?" she asks in one episode, pausing a few seconds for the answer.

In one episode, Dora takes her viewers to a hill to pick blueberries, but their entrance is blocked by a door that understands only Spanish. "Abre!" Dora commands the audience to say "open" in Spanish. After a brief pause, the door swings open.

Nickelodeon is basking in praise for cultural sensitivity. Besides Dora, the network has premiered two live-action series with Latin casts: "The Brothers Garcia," described as a take-off on "The Wonder Years," and "Taina," about a 15-year-old aspiring singer.

Yet when "Dora the Explorer" was proposed, Johnson admitted Nick's consumer products division expressed some hesitancy. It was worried the decision would "ghettoize" a potential product line that would only be of interest to Latin children, she said.

Instead, demand for toys and merchandise was so great that Nick started its Dora product line after eight months, instead of two years as planned. A prototype Dora doll was offered for sale online for $388.

Making the series was an education in itself.

The network's corporate philosophy is to consumer-test all of its shows relentlessly, so a series of experts were brought in to make sure Dora struck all the right cultural notes.

For instance, the skin color of the cartoon Dora was darkened as testing went on, her eye color changed from green to brown. One expert recommended that "Latin American animals" be used in background scenes.

Nick was told, too, that in many Spanish-speaking households, children are embarrassed when they are asked to translate for parents who don't speak English. "Dora the Explorer" viewers get the message that knowledge of more than one language made Dora powerful.

That's important for many young people to understand, particularly in the United States where fewer people are bilingual than in many other countries, said Lisa Navarette, spokeswoman for the National Council of La Raza, an advocacy group for Latin Americans.

The success of "Dora the Explorer" is heartening for people like Navarette, who know that a successful show with a Latin lead character is a far more persuasive argument for diversity than appealing to the consciences of television executives.

"It's a business," she said. "This shows that a program that happens to have a little Latina girl as the main character can be something that everyone wants to watch."

Judging by U.S. Census Bureau statistics, it's smart business to court Hispanic viewers, as well. The census estimated there were 35.3 million Hispanics living in the United States in 2000, up nearly 13 million in a decade.

Johnson knows that "Dora the Explorer" makes parents feel good. She's not so sure the reason why matters much to kids.