Sax in the city

"A lot of people don't even realize it exists," he says. "Most people think of saxophone as a jazz instrument. It is one of the better instruments for jazz, but it also works really well with classical music. It's the most versatile of all the woodwind instruments because it can get so many different, contrasting sounds." 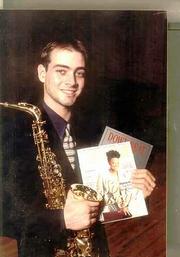 Gordon Holland/Special to the Journal-World

Jeff Timmons is making a name for himself by playing classical music on the saxophone.

Though classical is one of Western civilization's oldest forms of melody making, the saxophone is a relatively new addition to music's family of instruments. Thus, it's little surprise that the connection between classical music and saxophones is one that has only been recognized in recent years.

"Saxophone has only been around for a hundred years or something like that, so there's not a lot of classical repertoire for it," Timmons says. "The saxophone is not a set member in an orchestra right now Â like violin and cello are always there. Very seldomly, they'll play a piece that has a saxophone solo or part in it. They call a saxophonist to come sit in for the weekend or whatever. So, there's not any hopes of a steady, secure job."

Of course, Timmons' recent Down Beat award probably won't hurt his chances in the work force.

In the magazine's yearly student competition, participants send in a minimum of 20 minutes of music for judging. Timmons entered the category for college-level classical soloist, submitting three French-composed pieces that were recorded live at a recital last year. Near the end of April, Timmons learned that he had won the distinguished award, which was announced in the June issue.

Of course, one doesn't get to Down Beat without a lot of hours in the rehearsal room, and it comes as little surprise that Timmons usually practices between four and six hours a day. Though this rigorous rehearsal schedule doesn't leave much room for the leisurely pursuits of his peers, the payoff comes in concert.

"I have to practice just about every day, especially right before a big recital or any kind of performance" he says. "It kind of varies, but a lot of times I'll practice between four and eight hours a day and the goal is five to seven days a week. During the summer, you can't just put your horn away. A lot of people get to put their books away during the summer, but you have to keep improving. If you put it away for a couple of weeks, it really sets you back a long ways. Just a week off takes a long time to get back to where you left off."

When he's not practicing, Timmons is teaching 30 or so sax students in the Kansas City area each week. Working as an instructor for a couple of KC-based instrument dealers, Timmons is getting as much of a musical education as he can.

Timmons also just landed a gig at The New Dinner Theater in Overland Park, playing clarinet and sax in a production of "Joseph and the Amazing Technicolor Dreamcoat."

Though Timmons lists Paul Desmond, Charlie Parker and Stan Getz as favorites, he also names his father, Tim, as his biggest musical influence. The elder Timmons, associate dean of music and saxophone professor at the University of Missouri-Kansas City, guests with the Kansas City Symphony on a regular basis. He also instilled in his son an unyielding passion for music, combined with the discipline necessary to produce greatness.

"I started playing in third or fourth grade," Timmons recalls, smiling. "My dad started me out on a soprano sax, a little curved one, because my fingers fit a lot better on it."

In fifth grade, Timmons began his tenure in various school bands, remaining in them ever since. Now 24 and a saxophone performance major at KU, Timmons regularly plays in one of the university's three symphonic bands, as well as the wind ensemble, the saxophone quartet and the jazz ensemble.

"I guess I prefer classical solo stuff," he says. "When it comes to ensembles, I prefer the small chamber groups like the saxophone quartet and symphonic band is fun. I like solo stuff best, though."

With a year left to go on his undergraduate degree, Timmons has plenty of time to decide what he'll do when he completes his musical education. One dream option, he says, is to continue his studies in France, where some of the world's renowned classical sax masters reside. A second possibility is to get a master's degree at UMKC and look for gainful employment afterward. A third alternative is playing in a military band. Regardless, a quick glance at the classified ads makes it painfully obvious that classical saxophone players are not being hired by the dozen these days.

"Especially with classical saxophone, there's a real limited number of jobs," Timmons explains. "A lot of colleges don't even have a saxophone department. That's one reason I'm taking up clarinet and flute. A lot of colleges will hire somebody to teach flute, clarinet and saxophone. The bigger schools usually have a saxophone department, so that would be ideal. But you have to wait for someone to retire, and lots of applicants have doctoral degrees. So it's tough to say for sure what I'll be doing, but it will be along the lines of teaching and playing saxophone."