Appleseed Cast's Aaron Pillar does a bit of musical moonlighting 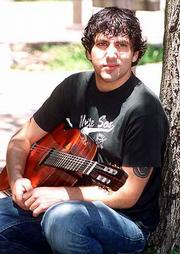 Lawrence guitarist Aaron Pillar, known for his work in The Appleseed Cast, has released a solo EP titled "Little Eyes."

When Aaron Pillar, guitarist for popular Lawrence-based emo rockers The Appleseed Cast, began composing songs for a potential side project, he had few notions as to where his musical musings would take him.

"I had this grand idea last February to do some songs that I had kicking around that I would sing," he recalls. "Actually me and Chris (Crisci, Appleseed lead vocalist/guitarist) would both sing that was the deal. We were working in this factory place, moving palettes of boxes around. We'd sit in this truck stacking boxes for five hours on end singing these really stupid, rhyme-y dumb lyrics. So we decided we'd do it."

With a bit of front money from their band's North Carolina-based label, Deep Elm, Pillar and Crisci headed off to Eudora's Red House Recording to lay down instrumental tracks with local producer Ed Rose, who's manned the board for several Appleseed releases.

Some of the material had been lying around for years ("Washed Away" dates back to 1994) and others were practically created on the spot ("Sunday" was completed two days before Pillar and Crisci hit the studio), resulting in an effort that proves that Pillar has more to offer than arpeggios and crunchy chords.

Fortunately Pillar also had plenty of assistance from Crisci, who played guitar, bass, piano and sang backup, and Rose, who handled drums and keyboards, programmed drum machines and produced the project. For Pillar, though, the ultimate challenge was perfecting the vocal tracks something that took time, energy and patience.

"I'd never really done it before," he says. "At least for me since I'm not that great at it I had to have that vibe of where they go. Ed basically, being the great producer he is, kicked my ass and ... didn't quite berate me but made me do the best I could."

For Pillar, whose work with Appleseed has been primarily as a guitarist and songwriter, stepping up to the microphone was a daunting task to say the least. Though the musical aspects of "Little Eyes" were put together with relative ease, tracking the vocals proved to be a painstaking process.

"A lot of emotions," Pillar says, describing the heavy vibes of the vocal sessions. "Bang on the walls, curse myself, sweat profusely, have Ed make me feel terrible in the ultimate quest to get a good take. I don't have the natural gift of a great voice, so I've got to work on it. We'd literally go line by line sometimes."

Eventually, though, Pillar's efforts began to pay off as his confidence grew and he began to realize that he did have a voice literally and figuratively of his own.

"Musically, I'm a complete moron, but I finally started to trust myself," he says. "Chris did some backup stuff but really played more guitar than he did anything else. He really kind of went, 'This is your thing, you can do it. Don't back off and not do what you want to do.' It was awkward at first, but after a while I really liked the vocals."

Though "Little Eyes" seemingly took forever to go from concept to completion, the total time spent in the studio was relatively short, according to Pillar.

"It was like a year in the making, but it really wasn't," he laughs. "If you put it all together it would've taken a week. It's only a half-hour long! It's not supposed to be anything special."

Pillar's time, effort and sweat didn't go to waste, judging from the finished recording, which received its official release a few weeks ago. Opening with the ghostly, Cure-like guitar riff of "A Replay" and ending with the understated instrumental "Sunday," the six songs of "Little Eyes" offer a quiet contrast to Appleseed's dense sheets of noise. Upon repeat listening, Pillar's project pulls the listener in with understated hooks that don't let go easily. Though the tracks are awash in layers of guitar, drums and drum machines and the occasional keyboard, "Little Eyes" sounds positively minimalist compared to Appleseed's wall-of-sound roar.

"With Appleseed, it's growing and growing," Pillar explains. "Every time we've done it now, it gets more painstaking and more detailed. This is the other outlet. It was meant to be even more stripped down than it was this little guitar riff and this little guitar part. Ed ended up playing more drums than I thought he would, but at the same time they probably would have been a lot more boring if he didn't."

Lyrically, Pillar took a monkey wrench to his heart, prying open his emotions and laying bare the pain of the past. "I might write these wrongs," he sings at one point, indicating that there's real emotion going on under that cool exterior and a willingness to discuss it openly.

"Originally, it was going to be a lot of frustration over a relationship, or relationships of mine in general," he says. "More about me how carried away I can let my emotions get. It is that but it changed over time, because things did get different. Ed was determined to make it more of a make-out, love record and stay away from the feeling-sorry-for-yourself thing. I'm so glad he was into that: 'Let's make it smooth and not like some sort of bummed-out, I hate myself and I want to die.' That's been done before and way better than I can do it."

Still, one can't help but notice the cynical nature of songs like "Farewell" and "Broken Boy," which tear open the scar tissue of old wounds, refusing to forget the past. The opening number, "A Replay," begins with the lines "Scars on my back/They prove a point/It points to you and this life/And this world is a tidal wave." Not exactly the stuff of Hallmark cards, but it's appropriate for a 30-year-old musician whose worldview has been tainted by the trials and tribulations of rock life. Of course, one can't help but surmise that "Replay" has something to do with the popular local watering hole of the same name.

"It was named after The Replay (Lounge)," Pillar confirms. "It's an indirect result of an incident that influenced those lyrics. That song definitely goes somewhere else, but it was based on one of the worst nights of my life and something that I will probably always being reminded of. It's out there. People know about it, but I don't like to talk about it."

Fortunately, the Hundred Hands project offers something in the way of redemption, particularly in the final track, "Sunday," a sublime instrumental that soothes the savage beast of Pillar's stark lyrical forays.

"We had vocals for it," Pillar recalls. "We started to mess with it and were just like, 'You know what? This is a cool instrumental.' It used to not be my favorite day of the week, but it is now. I love Sundays, man. I just thought that song kinda had that vibe. It's a perfect vacuum-the-house, clean-the-kitchen kind of song."

Though that sentiment might sound disingenuous from you average twenty-something rocker, from Pillar, who recently became engaged, it's a sign that things are getting a bit better and a little easier with age. Perhaps that's why Pillar is already working on tracks for another Hundred Hands release, though he intends to keep his side project evolving.

"Maybe next time I'll do some new songs with a different approach," he muses. "Maybe I'll change players, maybe add more players. I'd be curious to see where it goes next, but I certainly want to do another one."