Virtually all performers over 30, when asked how they like touring, say they love the stage and hate the road. As Bob Seger once remarked, it's one thing to help open a hotel and another thing to stay around long enough to close it.

Ringo Starr, 61 and a grandfather, echoes that sentiment. Once the drummer for a 1960s band called the Beatles, he has for the last 12 years acted as ringmaster of an ever-changing road show called Ringo's All-Starr Band. 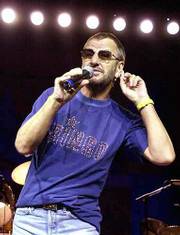 Ringo Starr ï¿½ 61 years old and a grandfather ï¿½ is touring again this summer. He announced Tuesday in Rama, Canada, the dates of his new All-Starr Band's North American tour.

"Someday I'll look around and say, 'No, that's it, I can't take one more hotel,"' Starr said. "But now it's still fun. I take my holiday, spend time with my family. I like to paint. Then I go out on the road for a while."

The seventh and latest edition of the All-Starr Band ï¿½ a strikingly eclectic group that includes Sheila E., Ian Hunter, Roger Hodgson, Howard Jones and Greg Lake ï¿½ is on the concert trail. It's a good-natured, fast-paced show in which Ringo sings his Beatles and solo songs in between a couple of hits from each of the supporting players.

That cast has undergone a time-shift over the years. The first All-Starr Band, in 1989, included such artists as Billy Preston, the late Rick Danko, Levon Helm, Clarence Clemons and Nils Lofgren.

The current tour has much more of an '80s flavor, which Starr says works out fine.

"I don't have a superlist of people," he says. "I like the surprise of changing it around. We put it together like a band ï¿½ you need a bass player, a percussionist, another drummer."

Radio time hard to come by

Ringo has been particularly immersed in All-Starr history of late because he has put together a box set, out this week, of past All-Starr highlights.

"We listened to tapes of all the shows," he says. "The only thing I knew from the beginning was it had to include Dr. John's 'Iko Iko.' I think that's the best number in the whole set."

Most fans come out to see Ringo, of course, and he has tried several times to parlay this into attention for his records: "Time Takes Time" in 1992, "Vertical Man" in 1998 and a Christmas album last year.


Critics liked all three, but except for occasional spins on oldies stations, radio wouldn't touch them and they never went much of anywhere.

Starr has a one-liner for this ï¿½ "I've crossed the threshold into golden-oldiedom" ï¿½ but it clearly frustrates him.

"You have to be heard on the radio," he says. "If you aren't promoted, people don't know your record exists. And we just couldn't get programmers to play it. It doesn't matter how many lunches you have with the buggers. You're beating your head against a wall.

It's sad, he says, that when "radio won't take any chances at all, "The listener loses. If radio had the attitude in 1964 that it has today, no one would have ever heard the Beatles," he said.

Speaking of the Beatles, Ringo also says that as of this week, he knew no more about George Harrison's reportedly terminal condition than he had read in news reports ï¿½ and that he won't believe those reports until he hears it from Harrison.

"I saw him three weeks ago and he looked fine," Starr says. "I mean, he was recuperating, but he was in good spirits.

"You hear so many of these stories and so often they just aren't true. My mother used to get calls saying I'd been in a serious car accident. Completely made up."

True or false, do such reports make him think of, say, his own mortality?

"Yeah, but you also think about how the press should get its facts right."

In fact, his own life is humming along well. He's clean and sober, he keeps busy, and he knows just how long an All-Starr Band tour can stay fun.

"We do 25 to 30 shows, and that's about right. We hang out together and have a good time. The hard part is rehearsals. Those are 10-hour sessions, so on those days we just go to bed," he said.

Ringo doesn't have to do this to pay the grocery bills. If his own records haven't done particularly well, the Beatles' best-selling "One" album "made it quite a good year for me."

So is there an All-Starr finale on the drawing board?