'Xena, Warrior Princess,' gets the X

Los Angeles — A character on Showtime's "The Chris Isaak Show" is fretting about how odd his Russian girlfriend's family seems.

When another character tells him he has xenophobia, he grows more disturbed. What's that mean, he asks. 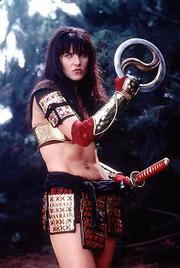 Lucy Lawless and her long-running "Xena, the Warrior Princess" series will air its final episode in syndication this month.

"Fear of the warrior princess," comes the reply.

"Xena: The Warrior Princess," which leaves the syndicated airwaves this week after six seasons, can be secure about its place in popular culture: It's become a reliable punchline.

Go-go costume? As viewers know, the series wasn't wedded to a consistent fashion or world view. This, the producers liked to say, was a Xenaverse all its own, filled with gods and monsters and shifting blithely from ancient Greece to timeless hell to the modern world circa 1940s.

While fans dicker over mementos (with the proceeds going to charity), series star Lucy Lawless is reveling in her release from breastplates, 12-hour-plus workdays and enough stunt work to last a career.

"The best vacation of my life," she reports from Auckland in her native New Zealand. "The freedom of it blows my mind."

The 5-foot-10 Lawless carried the weight of "Xena" on strong shoulders, making the improbable mix of dark mythology, action, campy humor and sly sexuality work with her charm and energy.

She was ably assisted by co-star Renee O'Connor, who as perky, petite sidekick Gabrielle was part of one of television's more intriguing gal pal duos.

"A big girl and a little girl and they're a mighty force together," Lawless said, neatly summing up the appeal. "It's about friendship, and nobody has seen two females without a male boss telling them what to do."

That approach made "Xena" a hard sell when it was first pitched to a studio and TV stations, said Rob Tapert, co-executive producer (and, as of March 1998, real-life husband to Lawless).

"We were at Universal and (executive) Sid Sheinberg said 'Look, I was a big champion of 'Bionic Woman' but it was never very successful, so I have this fear people won't watch women action heroes,"' Tapert recalled.

There was an argument in favor of the genre ï¿½ "Hercules: The Legendary Journeys," which first featured the character of Xena in spring 1995, was a hit. A female hero provided a twist, Tapert said.

"This is a style of action we can't have with 'Hercules' because it looks too stupid for a 6-foot-3 guy to do it," he recalled arguing. "It will be new and cool and something different on television."

In fine acrobatic form, Xena flipped nimbly over and around her enemies before dispatching them with weapons ranging from sword to frying pan.

Audiences, in turn, flipped for "Xena," making it among the top-rated syndicated dramas throughout its domestic run and with a worldwide distribution that carried it to more than 100 countries.

The show made its mark in another way: Early studio and TV station fears that Xena and Gabrielle might be perceived as lovers came true, with some viewers celebrating what they saw as lesbian affection.

"It didn't matter one way or the other to me, or to Renee," Lawless said. "It made no difference in how we played the roles. We just tried to play a relationship of love and respect, and what people wanted to read into it was fine.

"There were times we'd play up to the lesbian subtext. ... The producers and writers weren't afraid to toy with that. But it was never meant to be an overtone," she said.

The show's evolving emphasis was part of the reason for the speculation, Tapert said.

"Originally, it was a story about Xena and Gabrielle confronting the world. But the story shifted and it became about how the relationship between the two of them was affected," he said. "That became fertile emotional ground."