By Tune In, By Kevin McDonough

Two comic veterans with a history of goofball screen personas get their own shows tonight. Best known for his classic character Pee-wee Herman, Paul Reubens hosts "You Don't Know Jack" (7 p.m., ABC), the trivia quiz show based on the 1995 CD/ROM of the same title. Reubens assumes the role of the host Troy Stevens. Sporting a Beatles wig and a real attitude, Troy is not above distracting contestants as they try to win $50,000. Another episode follows at 7:30 p.m.

l During the brief run of his syndicated afternoon chat fest, Martin Short introduced the character of Jiminy Glick, an overweight and out-of-touch Hollywood hanger-on with a rambling interview style. Now Jiminy gets his own talk show with "Primetime Glick" (9:30 p.m., Comedy Central). 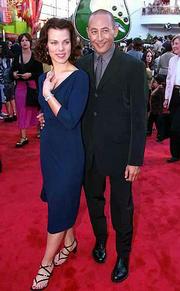 Paul Reubens, best known for his Peewee Herman character, plays the host of a trivia game show in "You Don't Know Jack," which premieres at 7 p.m. today on ABC.

The irrepressible Short has made a career of lampooning outrageous and pathetic show biz types. His strange Jackie Rodgers Jr. character was one of the staples of "SCTV." Jiminy resembles a grotesque caricature of Merv Griffin gone to seed. His voice changes without warning or reason from a velvet lisp, to a growl, to a girlish falsetto as he pummels guests with inane, inappropriate and poorly researched questions about their careers, their personal lives and their birthdays.

On tonight's episode, Glick manages to mangle the pronunciation of Bill Maher's name, and grills Steve Martin's decision to play for a "smarter" audience. Among the show's real pleasures is Michael McKean ("Best in Show") as his bandleader and sidekick Adrien Van Vorhees. Adrien plays a mean rock 'n' roll harp and sports the kind of deep tan that comes from a jar. Short also plays every character in parody commercials, including a clip of a show called "Tom Green in Afghanistan."

Like everything Martin Short does, "Primetime Glick" is played without stops. While uneven at times, "Glick" has moments of wicked brilliance.

l Everyone who cares about education or who feels passionately about the arts should watch "Who's Dancin' Now" (7 p.m., PBS, check local listings). The documentary offers a follow-up to the 1983 film "He Makes Me Feel Like Dancin'." That effort followed former New York City Ballet principal dancer Jacques D'Amboise and his National Dance Institute's efforts to introduce dance in public schools. D'Amboise offered fourth-, fifth- and sixth-graders the chance to absorb the passion, hard work and dedication involved in performing.

Seventeen years later, "Who's Dancin' Now" chronicles the adult lives of those grade-school dancers. They are now brokers, teachers, scientists and entrepreneurs. Each former student credits D'Amboise and his dance lessons for giving them the confidence and discipline to achieve their goals.

l Shaggy, Sisqo and Lil' Bow Wow perform on "Teen Choice Presents: Teenapalooza" (7 p.m., Fox). The title sounds like something "The Simpsons" might have parodied five years ago.

l C.J. arranges for passionate cartographers to have the president's ear on a repeat of "The West Wing" (8 p.m., NBC).