Washington — It's a mark of an artist's genius when his work lingers in the consciousness long after its moment passes. Here, reconstructed from adolescent memory, unrefreshed by database searches or TV Land reruns, is a 30-year-old scene starring Carroll O'Connor in one of the most influential sitcoms in television history:

Archie: "That's something the hebes do. They change their last names but keep their first names so that they'll still recognize each other." 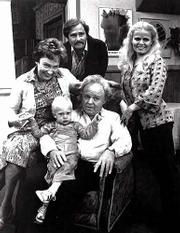 The Bunker family of "All in the Family," played from left by Jean Stapleton, Rob Reiner, Sally Struthers, and Carroll O'Connor, are shown in this 1977 file photo. Seated in O'Connor's lap is Jason Draeger. O'Connor, whose portrayal of Archie Bunker on "All in the Family" helped make the groundbreaking TV comedy part of the American dialogue on race and politics died Thursday. He was 76.

Archie: "Well, you take a guy like Isaac Schwartz. He changes 'Schwartz' to 'Smith' but he leaves Isaac. So he's Isaac Smith. Jacob Cohen, he becomes Jacob Kane. See?"

Mike (sarcastically): "Yeah, I see what you mean, Arch. Like Abraham ... Lincoln."

O'Connor, who died Thursday at the age of 76, created an indelible character, Archie Bunker, and played him for 13 years. Bunker changed television, but that alone doesn't begin to assay O'Connor's achievement as an actor. Where Archie was a bedrock blue-collar Republican with a limited worldview and a salty tongue, O'Connor was born into prosperity, college-educated, socially and politically liberal, a refined, sensitive man.

O'Connor was 46 when he came to his role of a lifetime, a veteran of more than 100 stage and screen parts.

Before series creator Norman Lear selected him for "All in the Family," he had been considered for the part of the Skipper on "Gilligan's Island" (Lear had also considered Mickey Rooney for Archie).

Archie was a bigot who uttered words that had never been broadcast on TV before ï¿½ spic, dago, Polack, etc. He never spoke the most inflammatory racial epithet of all ï¿½ the "N" word ï¿½ but Lear contrived to have Sammy Davis Jr. say it in a memorable guest appearance.

What was stunning about "All in the Family's" frankness was the context in which it came. At the height of the Vietnam War, at the height of the civil rights movement, at the birth of the feminist and gay movements, prime-time TV was merrily oblivious. Through the middle and late 1960s, CBS's schedule was dominated by corn pone classics like "The Beverly Hillbillies," "The Andy Griffith Show" and "Green Acres." The five most popular programs in the season immediately preceding "All in the Family's" debut in January 1971 were "Marcus Welby, M.D.," "The Flip Wilson Show," "Here's Lucy," "Ironside" and "Gunsmoke."

"All in the Family" crashed this happy party like a drunken bull. Lear's writers poured on the "relevance." It wasn't just race, religion and politics that tumbled out of 704 Hauser St. but a staggering variety of conflicts and taboo "issues": impotence, homosexuality, rape, miscarriage, menopause, addiction, infidelity, breast cancer, abortion. Talk about reality TV!

Some critics denounced "All in the Family" for making bigotry enjoyable, even lovable. But that's a simplistic reading of O'Connor's skill. His achievement (and the program's) is not that he made a bigot lovable but that he made a bigot three-dimensional ï¿½ a result of a whole complex weave of experiences and influences.

Archie may well have been the most important character in TV history. As television historian Keith Adams points out, Lear expanded his empire by creating two variations on O'Connor's creation: George Jefferson, the nouveau riche black bigot of "The Jeffersons," and Fred Sanford, the working-class black bigot of "Sanford and Son."

Normally, a 13-year run on a TV series kills an actor's career; he has become too closely identified with his signature role to be convincing in new ones. This is why actors often seek to exit a series after only a few years.

But not long after "Archie Bunker's Place," the follow-up to "All in the Family," O'Connor did the remarkable: He successfully came back to series TV. In 1988, he began starring in "In the Heat of the Night," a police drama based on the Rod Steiger-Sidney Poitier film. O'Connor played Bill Gillespie, police chief of a small Mississippi town. He won an Emmy, his fifth, for the role, which was about as far from Bunker as Queens, N.Y., is from Sparta, Miss.

That show lives on in reruns, but it's as Archie Bunker that O'Connor will be remembered to eternity. To contemporary eyes, the series may appear ahead of its time. The disturbing question is, is it ahead of our time?

Would Archie Bunker be possible today?