When Maryl Sartin, 12, returns to Lawrence each summer, she knows one thing will be waiting for her: Summer Youth Theatre.

"I come here every school break to spend time with my mom," said Maryl, who will be a seventh-grader at Northwest Middle School in Kannapolis, N.C. "I was in Summer Youth Theatre last year, in 'The Wizard of Oz.' I was one of the Emerald Citians."

The Summer Youth Theatre at the Lawrence Arts Center offers students who will be in kindergarten through 12th grade a chance to be a star. Here, Gabe Murphy and Kate Naramore practice for tonight's debut of "Carnival," which will also be presented Friday, Saturday and Sunday.

This time around, Maryl portrayed a captain of the Wonderlandians in last weekend's production of "Alice in Wonderland" at the Lawrence Arts Center.

By the end of July, Summer Youth Theatre, which was established in 1974, will have presented six shows at the arts center. Already, students who will be in kindergarten through third grade presented "Circus McGurkis" and students who will be in fourth through seventh grades staged "Alice in Wonderland." Youngsters preparing for eighth through 12th grades will present "Carnival" today through Sunday.

Jennifer Glenn, director of the shows featuring the K-7 groups, says involvement in Summer Youth Theatre provides the youngsters with "the whole theatrical experience" ï¿½ from auditioning to acting to working backstage to helping make costumes.

"It's important that the kids have a good time," she said. "It's a noncompetitive situation. There's a team attitude fostered in the group. ï¿½ It's not an actor training ground but more to build community through the process of the play."

Plays are picked, in part, based on their ability to accommodate a large number of cast members: 43 children were cast for "Alice in Wonderland," 30 for "Circus McGurkis" and 25 for "Carnival"

Stephanie Orton, 13, an eighth-grader-to-be at South Junior High, said opening night is always a little nerve-wracking. Last summer, she played a beaver in "Ice Wolf" and a crow in "The Wizard of Oz." This time, she played the mean Duchess in "Alice in Wonderland."

"I get nervous for the first show, but not for the others. I flip my hands to help my nervousness," she said, demonstrating the technique. "Once I get on stage, it sort of goes away."

Ric Averill, director of "Carnival" and "The Elephant Man," said studies have shown that being involved in theater helps youngsters develop discipline, a sense of community and an ability to work with others.

"It teaches them reading and comprehension skills," he said. "It really encompasses their whole life. They learn about short- and long-term goals."

Theater also allows youngsters to explore their feelings, according to Jack Sanner, 10, a future fifth-grader at Hillcrest School who appeared in "Alice in Wonderland."

"I get to meet friends, and I get to be silly," Jack said. "And you get to express how you feel in theater."

Taylor White makes a striking Marco the Magnificent in "Carnival," one of the Summer Youth Theatre's six productions. The plays are selected, in part, because they feature a large cast.

Laura Yates, 13, who will be an eighth-grader at Southwest Junior High School, gives Summer Youth Theatre a thumbs-up. This is Laura's first year with the group; she played the Queen of Hearts in "Alice." 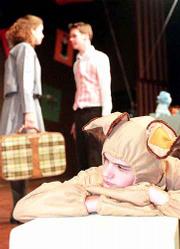