Besides Julia Roberts' win, there were few sure bets this year

Los Angeles — "Gladiator" won five Academy Awards on Sunday, including best picture and actorï¿½ Russell Crowe ï¿½ and Julia Roberts won the best actress trophy for her portrayal of the law assistant who takes on a polluting power company in "Erin Brockovich."

"It takes a lot of people to make a Colosseum, but it only takes one or two to mess it up. To all the wizards who brought to life the sights, sounds and citizens of a faraway world, we should take a chisel to this statue and give you your fair share," said Douglas Wick, a producer of "Gladiator," which also won for sound, costume design and visual effects. 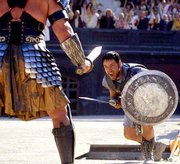 Steven Soderbergh did what observers deemed impossible: He won best director for "Traffic" even though people felt he would split the vote by being nominated for "Erin Brockovich," the movie based on the story of a former Lawrence resident.

When she won, a giddy Roberts ascended the auditorium stage and warned that she would be speaking for a long time "because I may never be here again."

She clutched her first Oscar and said, "This is quite pretty."

Steve Martin made his debut this year as the host of the Academy Awards.

The audience was amused by her glee.

"I love the world. I'm so happy," Roberts squealed.

Del Toro, who portrayed an honest Tijuana detective, thanked Soderbergh and others connected with his movie, while Harden noted that few people had seen "Pollock," since it opened in theaters the same week as the Oscar nominations came out. She thanked the voters for taking the time to review the videotapes made available to them.

"Ed Harris, thank you for inviting me to share your passion," she said to her director, who also played the title role. 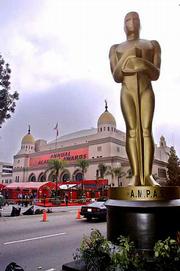 An Oscar stands watch over the Shrine Auditorium in Los Angeles as a crowd gathers to enter the bleacher area for Sunday's 73rd Academy Awards. The ceremony will move next year to a new theater in Hollywood built especially for the occasion.

Because "Pollock" had little theater exposure, Harden was considered a longshot. Judi Dench of "Chocolat" and Kate Hudson of "Almost Famous" were thought to be more likely.

"The movie was a love letter to music and to my family so I dedicate this to all the musicians who inspire us and my family," he said.

The show began from orbit as astronaut Susan Helms, with fellow crew members of the International Space Station floating by her side, introduced first-time host Steve Martin.

"By the way that introduction cost the government $1 trillion," Martin quipped to the glittering Shrine Auditorium throng.

Martin showed off some of his old standup silliness from the '70s, and with a mock unctuousness offered a good-natured skewering of Hollywood.

He joked that movie trailers these days give away too much.

"I saw the trailer for 'Dude, Where's My Car?' and it ruined it for me," he said, drawing big laughs. "Maybe that's not fair because I had read the book."

He said that hosting the Oscars is "like making love to a beautiful woman. It's something I only get to do when Billy Crystal's out of town."