An icon in the independent film world for making 1992's "El Mariachi" for the low, low price of $7,000, Rodriguez comes out this week with a family film featuring a big-name cast and loads of special effects, "Spy Kids." 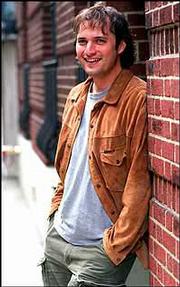 Director Robert Rodriguez's latest movie, "Spy Kids," stars Antonio Banderas and Carla Gugino as married former spies whose kids must save them from kidnappers. The family adventure is a departure for the 32-year-old Rodriguez, an icon in the independent film world for making "El Mariachi" in 1992 for $7,000.

Now 32 and a father of three young boys, Rodriguez says this is the movie he always wanted to make.

"I really wanted to do a really big, cool, family action and adventure movie like the ones I grew up with like 'Escape to Witch Mountain' and 'Willy Wonka' and 'Chitty Chitty Bang Bang,"' he says during a recent interview, kicking back on a couch in green cargo pants and a baggy gray T-shirt.

Growing up in San Antonio, the third of 10 children, Rodriguez started making movies starring his brothers and sisters in his back yard at age 12. As he got older and studied at the University of Texas at Austin, he kept making movies about kids ï¿½ and they beat out dark, brooding works to win film contests.

His first film, "Bedhead," a short he made in 1991 starring his four youngest siblings, is about a little girl with psychic powers who torments her brother.

But it's his first feature, "El Mariachi," that put Rodriguez on the indie film map.

After eloping to Venezuela at 21 with his college sweetheart, Elizabeth Avellan, Rodriguez formed Los Hooligans Productions with his bride.

He raised money for the film by working as a paid subject in a clinical experiment at a drug research center. He wrote, directed, shot and edited every frame of the story of a mariachi who goes to a Mexican border town looking for work and is mistaken for a killer.

Then Rodriguez walked away with the audience award at the 1993 Sundance Film Festival.

"When I made 'Mariachi,' the only reason I even made it an action film was because the video market I was making it for wanted an action film. And when Columbia bought that and wanted to remake it as 'Desperado,' I said, 'I'll do that but I want you to include my short film 'Bedhead' on the videotape so people know that I'm gonna do something other than action movies,"' Rodriguez says.

After 1995's "Desperado," which also starred Banderas, Rodriguez wrote, directed and edited one of the four segments of "Four Rooms" later that year. He teamed up with Quentin Tarantino on 1996's "From Dusk Till Dawn," a vampire comedy that co-starred Harvey Keitel and George Clooney. And in 1998, Rodriguez directed the teen thriller "The Faculty" starring Elijah Wood, Josh Hartnett and Jon Stewart.

Rodriguez says his main intention with all his films, including the home movies he now makes at his Austin area ranch with his kids ï¿½ 5-year-old Rocket, 3-year-old Racer and 2-year-old Rebel ï¿½ is to entertain.

"All of the independent people who say they're independent, they didn't make their movies by themselves. I did. I was the whole crew," he says, laughing.

"I mean if you really looked at ('El Mariachi'), the only reason it seemed arty was because it was in Spanish. But if you spoke Spanish you realized, this is just a cheesy exploitation movie about a guy with a guitar case who becomes a gunman.

"It was total cheese. I was just having fun with it."