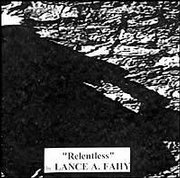 "Welcome to my living room/This is where I hang my soul" sings Lawrence vocalist/guitarist Lance A. Fahy on his latest indie release, "Relentless." Billed as the second volume in his "home-made music collection," these 13 new tracks pick up where last summer's "Songs For Sale" left off. Fahy possesses a strong, flexible voice that works well alongside his simple acoustic strumming, which has helped to make him a regular on the area folk circuit. Those gigs have paid off on this follow-up effort, where he's gained confidence and a willingness to dig a bit deeper into his psyche. "Nina," a searing ode to romance set to fluid arpeggios, is wise enough to make its point in under two minutes, while "Cluttered and Complicated" is brought to life by Fahy's deft guitar work. The shadowy, Leonard Cohen blues of "One Good Vice" and the comfortably numb, happy hour waltz of "Cashed" underscore the range of his musical Â if not lyrical Â sensibilities and the elastic nature of his super-ply voice. "Garlic Song" giddily envisions a future where garlic is prohibited, and Fahy takes a "Fear and Loathing"-meets-"Traffic" journey to score the outlawed herb. Pretty funny song, though Â with the recruitment of new conservative drug czar John "Lock 'Em Up" Walters, it's not that hard to imagine. "Static Device" mines a similar vein with lesser results, but Fahy scores handily with "Don't Get Lost in Wichita" and "Defending Johnny Cash," where he balances his eccentricities with a dry sense of humor and infectious surfin' bird guitar lines. Closing the album with "Ain't No Sunshine" is a questionable move Â the song's been covered a million times and Fahy doesn't add anything here Â but "Relentless" is a stellar release otherwise, tuneful, understated, wry and moody. It's too bad there's not a larger audience for this music, which Â right or wrong Â shows up in coffeehouses more often than medium-sized clubs. For those willing to seek Fahy out, however, it's a trip worth taking. 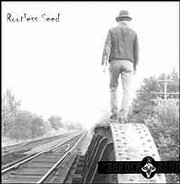 Self-proclaimed "Rawhide Rockers," Lawrence's Border Band blends blues rock and folk with dashes of country and nods to bluegrass and rockabilly on its latest release, "Rootless Seed." An unabashedly old-school effort, "Seed" has a sparse, cowboy sound that matches the quartet's dusty, Old West image. Unfortunately, the band doesn't exercise that less-is-more approach when it comes to song selection. With a gut-busting 16 tracks clocking in at an endurance-testing 73-plus minutes, the Borders certainly leave no musical stone unturned here. Had the collection been honed down to about half the length, it might've be easier to digest, but brevity is obviously not the order of the day and the consequence is mixed results. "Whiteline Moonshine" sounds like a great lost Johnny Cash song, and the Border's laid back rockabilly groove makes for a promising, spitfire start. Things head south on a reserved rendition of Hank Williams Sr.'s "Ramblin' Man," which attempts to fill shoes that prove too big for Melvin Litton's vocals, though the instrumentation achieves a moonlit groove that trots along nicely. Lead guitarist Roger Holden has a sweet tone and former member Chubby Smith plays a mean standup bass, but no one in the outfit seems to possess the self-assured chops or impeccable taste that mark the genuine masters. Blues can be a deceptively simple music, often shining brightest in the hands of the most seasoned musicians, making tame bar bands of everyone else. The Borders are solid but certainly not fiery, taut or revelatory. Litton's leathery voice isn't unique enough to reignite the group's journeyman blues leanings and his lyrics are occasionally a bit on the hippy-dippy side ("Wildflower," "Jimi's Hymn"). "Seed's" production is spacious and the band works well together, but it doesn't grab listeners the way its influences Â Dylan, The Band, etc. Â do with such illusive ease. There's a decent album buried somewhere in "Rootless Seed," bogged down by the weight of a group that didn't know when to unplug the amps and take a load off.