City has big change of art

By By Matt Merkel-Hess

You could call it the annual changing of the guard in the City of the Arts.

Workers and artists Thursday mounted a new exhibition of outdoor sculptures that will be in place until next spring on various downtown Lawrence street corners. 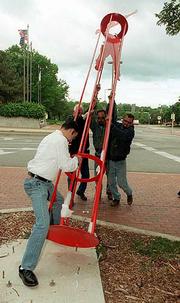 Eight new pieces of artwork are up as part of the 14th annual Downtown Lawrence Sculpture Exhibition. Thursday near Sixth and Massachusetts streets, Dan Sabatini, a member of the Lawrence Arts Commission, and a trio of Lawrence Parks and Recreation workers, from top left, Larry Colley, Kip Patzel and Mark Graves, install "Artist Hanging On" by Omaha, Neb., artist Leslie Bruning. The exhibit continues into spring 2002.

"It adds to the character of downtown and displays the uniqueness of Lawrence," said Dan Sabatini, a member of the Lawrence Arts Commission.

The artworks represent the 14th annual Downtown Lawrence Sculpture Exhibition, and will be on display through April 2002.

Sabatini said the exhibition promoted the town as a city of the arts.

The eight pieces by seven sculptors were chosen from more than 30 submissions, Sabatini said. The show was curated by Bob Soppelsa, director of the Mulvane Art Museum at Washburn University in Topeka. Artists received $500 per piece from the city of Lawrence.

"It's always exciting to be accepted into an exhibition," said Beth Van Natta, a Halstead artist whose limestone-and-steel piece, "Just a Little Evil," is on display on the northwest corner of Eighth and Massachusetts streets. "This one is particularly nice because it runs for a whole year, so it gets the artist quite a bit of exposure."

M.J. Lamberson, an artist from Dannebrog, Neb., described the Lawrence exhibition as the father of outdoor sculpture exhibits in the Midwest. Her welded steel piece "Overhead Overture" is on display at the southwest corner of Seventh and Massachusetts streets.

"It's pretty special to get into this exhibit," she said. "It's the outdoor sculpture exhibit that most of the ones in the Midwest are patterned after."

The exhibition was started by Jim Patti, a Lawrence sculptor and member of the Kansas Sculpture Assn. When he proposed the idea to the Lawrence Arts Commission, Patti said, the only public sculpture was in front of City Hall; he thought it was important to have more.

Since then, downtown has been filled with different pieces each year ï¿½ some of which are purchased or donated to the community.

"It's been successful all of these years," Patti said. "And it's been a good thing for the artists."

The exhibition is sponsored by the Lawrence Arts Commission, the Kansas Sculpture Assn., the Lawrence Convention and Visitors Bureau and the city of Lawrence.