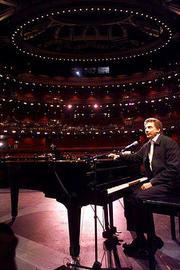 The grandeur of the new Kodak Theatre envelopes singer Barry Manilow during a sound check on the theater's stage. The theater, the new home to the Academy Awards show, will open Friday with a concert by British tenor Russell Watson and the Hollywood Bowl Orchestra and chorus. Manilow is slated to perform there in December.


Right now, the appropriate attire is hard hat, work shirt, jeans and heavy boots. Come Friday, Hollywood's glitterati will appear in tuxes and gowns for the grand opening of the new home of the Academy Awards, the Kodak Theatre.

Workers are applying finishing touches to the $94 million palace at the traffic-clogged intersection of Hollywood Boulevard and Highland Avenue, part of an ambitious, four-year, $615 million project aimed at reviving Hollywood's decaying downtown.

The Hollywood and Highland complex, as it's being called, towers over the adjacent Grauman's Chinese Theater and includes the Renaissance Hotel (a made-over Holiday Inn).

It offers a permanent home to the Academy of Motion Picture Arts and Sciences' awards show after 70 years of the gypsy life. The Kodak is just a block away from the Hollywood Roosevelt Hotel, where the first Oscars were handed out in a 15-minute ceremony in 1929.

"It's thrilling to know that we can go back and have the Academy Awards where they started," said Academy spokesman John Pavlik.

The Hollywood Chamber of Commerce is happy too. "We're hoping that the development will jump-start tourism," said Leron Gubler, chamber president.

The project is being developed by San Diego-based TrizecHahn Co., with $100 million from the Los Angeles Community Redevelopment Administration. The Eastman Kodak Co., which long has supplied Hollywood with film stock, kicked in an undisclosed sum for the naming rights.

TrizecHahn spokeswoman Beth Harris said the project "had the total support of city officials." She said the complex will create 2,500 new jobs and contribute $8 million in taxes annually to the city.

One of the two entrances to the new Kodak Theatre, nearest Highland, is a true Hollywood spectacular. It's based on D.W. Griffith's colossal set for his 1916 epic "Intolerance."

Life-size stone elephants sit high above the steps leading to the Babylonian Courtyard, full of restaurants, nightclubs, shops and Debbie Reynolds' collection of movie costumes and memorabilia. At the top of the stairs is the Grand Arch, adorned in a Babylonian bas-relief. It has been slanted so that the famous HOLLYWOOD sign on the hills nearby is framed through one of the portals.

Inside, the Kodak is as intimate as a theater can be. The four levels are surprisingly wide, and the balconies are as close to the 120-foot-wide stage as they can be.

The 3,500-seat theater is crowned by a crystal and silver chandelier billed as "a tiara of light," an oval that's a cross between the floor pattern of Michelangelo's Campidoglio and a Busby Berkeley geometric dance pattern.

The exterior lacks a sense of presence, though. Great halls such as New York's Lincoln Center, Washington's Kennedy Center and Los Angeles' Music Center announce their dignity with marble columns and chandeliers behind tall windows.

Unfortunately, the grandeur of the Kodak is hidden behind walls.

The theater's debut program Friday features British tenor Russell Watson, the Hollywood Bowl Orchestra and a 60-voice chorus. Besides the March 24 Academy Awards, the theater has booked performances by Melissa Etheridge, Barry Manilow and the American Ballet Theater, and a run of Broadway's "The Full Monty."

The Kodak's operators ï¿½ Anschutz Entertainment Group, which runs the downtown Staples Center and is headed by Kansas University benefactor Philip Anschutz ï¿½ also hope to host television specials and other award shows. But the Oscars will be the theater's signature event.

Pavlik said there's a traffic plan in the works for the Oscar ceremony. The 3,000-car underground garage will be available for guests, and the standard flotilla of limos will park a few blocks away at the Hollywood Bowl.

The estimated 1,500 journalists covering the Oscars will work in a smaller hall elsewhere in the complex. The winners will be whisked from the ceremonies to the media center through a passageway. The annual post-Oscar Governor's Ball will be held in the 40,000-square-foot Grand Ballroom adjacent to the Kodak.

What about America's preoccupation of recent weeks ï¿½ security?

"We think this year's Oscars will be the safest we've ever had," Pavlik said. He followed longstanding academy policy by not commenting on specifics, other than to say, "we have a different perspective on security in recent weeks."