The violence of apartheid

A play opening this week at Kansas University takes a look at the injustices and aftermath of apartheid in South Africa. Yet, the drama is not overly political and centers on four women who are obsessed with the soap opera "The Bold and the Beautiful."

"So What's New?" by South African playwright Fatima Dike, is directed by Joy Wrolson, a KU doctoral student in theater and film from Minnesota who is concentrating on southern African theater and drama. 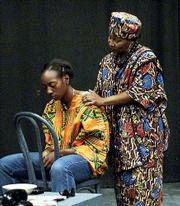 Big Dee, standing, played by Reta Cosby, explains her strict nature to her daughter, Mercedes, played by Dianne-Yvette Cook, in a scene from "So What's New?" The University Theatre production, centered on the injustices of South Africa's apartheid system, opens Thursday night.

Wrolson visited Zimbabwe in 1990 as part of a journalism internship. She earned her master's degree in African languages and literature from the University of Wisconsin-Madison.

"So What's New?" is set in a shebeen, or an illegal bar set up in a home, in Soweto, South Africa. Three of the characters ï¿½ Big Dee, Thandi and Pat ï¿½ have been friends since their days in a gospel choir. The fourth character, Mercedes, is the daughter of Big Dee, the shebeen queen.

Although all three women are relatively wealthy and successful, much of what they do is illegal. Pat sells real estate to blacks, who are not allowed to own property. Thandi sells drugs. Big Dee sells alcohol to blacks.

The Conservative apartheid government had lifted many of these restrictions by 1989 ï¿½ but only in law, not in practice.

"Much of the play's action surrounds 'The Bold and the Beautiful,'" Wrolson said. "They discuss their own relationships with men and the danger in their lives."

The climax of the play comes when a machine gun attack and explosion of grenades disrupt the transmission of the TV show.

While the three older women are obsessed with men, how they make money and the soap opera, Mercedes has become interested in politics, perhaps because her deceased father was a political activist. The play suggests she begins to participate in terrorist activities that contribute to apartheid's end.

Wrolson said the women have few possibilities for leading fulfilling and productive lives, but the play makes no judgment on the way their lives have turned out.

"The choices they have made may seem poor, but they did what they had to do to survive," she said.

Paul Meier, KU associate professor of theater, has been working with cast members Dianne-Yvette Cook, Reta Cosby, Halley Harsh and Angelica Armstrong to perfect the English, Afrikaans and Zulu languages of the characters. Brett Dicus has created the lighting design.