London — Three people have been arrested on suspicion of cheating on the British version of the TV game show "Who Wants to Be a Millionaire."

Maj. Charles Ingram and his wife, Diana, were arrested at their home west of London. Detectives interviewed them, released them on bail Thursday and ordered them to return to a central London police station in December. 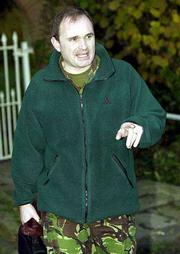 British Army Maj. Charles Ingram, who serves with the Royal Engineers, leaves his home recently in Easterton, England. Ingram, 38, and his wife Diana, 37, were arrested Thursday at their home following allegations of deception over the officer's $1.4 million win on the popular tV quiz show "Who Wants to Be a Millionaire?".

A 51-year-old man, arrested Thursday in Cardiff, Wales, was released on bail to return for questioning in February. He was not identified.

None of the three has been charged, a Scotland Yard spokeswoman said Friday. They were questioned over an allegation of conspiracy to defraud and their homes were searched, she added.

Ingram, 38, told reporters at his home that he could not comment.

"All I can say is that this is the first opportunity we've had to put our side of the story over. The time will come when we can talk freely," he said.

A police inquiry began in September into an episode of the popular show in which Ingram won 1 million pounds, or $1.41 million.

The episode was not broadcast, and Ingram's check was withheld because of the suspected cheating. News reports suggested that someone in the audience relayed to him correct answers to questions by coughing.

Diana Ingram, 37, and the major's brother-in-law, Adrian Pollock, had both previously won 32,000 pounds, or $45,000, on the game show. She later wrote a book titled "Win a Million," based on a theory she and her brother had used to succeed.

After the inquiry was announced, Ingram held a news conference and denied wrongdoing.

"He is stunned, bewildered and devastated at the action that has been taken and feels that the effects leave his career in the Army and livelihood in tatters," said a statement released at the time by his lawyers.

Celador Productions, which makes the show for Independent Television, said the company did not wish to comment on the arrests.

"Who Wants to Be a Millionaire" was created in Britain and became an instant evening television hit. Versions of the show have spread to several countries, including the United States, where Regis Philbin is the host. A U.S. theme park also is in the works.