Ray Davies, singer, songwriter and who along with brother Dave founded the seminal '60s rock group The Kinks has been performing his music and spoken word cabaret act, "The Storyteller" for several years now. Sunday night Davies and accompanying guitaris Pete Mathison performed at Kansas City's Memorial Hall, which Davies accurately described as a "barn" relative to the intimacy and quietude of the performance.

"The Storyteller" is as much an exercise in reminiscence and woolgathering as in music making, a fact that seemed to annoy several members of the audience that couldn't be bothered to appreciate the spirit of the performance. The charming and affable Davies took the exhortations of drunkards in stride and dulled their edge with humor. 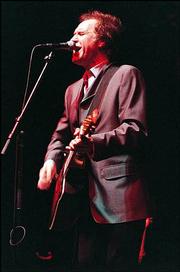 The central conceit of the performance centers on Davies lecturing from a well-worn copy of an enormous, black-bound edition of his autobiography, "X-Ray." Interspersed in the telling of the tale of his childhood aspirations, family life, and the formation of the Kinks up to and including the recording of their breakout hit "You Really Got Me," is the music.

Delving deeply into his musical past, Davies played both well-known favorites and obscure gems that might only be familiar to dyed-in-the-wool aficionados. The lanky singer, in his mid-fifties and in fine voice opened the show with one of the last Kink's hits, "Come Dancing."

After describing the century and culture he had been born into the middle of, Davies performed "Victoria," followed by a raucous version of "Twentieth Century Man," and a song original to the "Storyteller" show, "London Song."

Discussing his families life centering as it did in the front room of their home, and the important roll of music, especially in the romantic escapades of his older sisters, Davies sang Billy Eckstine's "That Old Black Magic," a song banned from the parlor by his parents.

"Tired of Waiting," "Set Me Free" and "See My Friends" preceded "Autumn Almanac," which Davies characterized as the only rock and roll song written about gardening.

Davies then spoke of a teenage injury that quashed his dreams of soccer stardom and sang the "Storyteller" set piece "X-Ray." He then sang "Stop Your Sobbing," a Kinks song re-popularized in the '80s by his future ex-wife Chrissie Hynde and the Pretenders.

Davies finished his set with "Dedicated Follower Of Fashion," "The Ballad Of Julie Finkle," and "You Really Got Me." Earlier, alluding to the oft-time testy relationship with younger sibling Dave, Davies joked that he's "only a minor character in this piece." The tale of "You Really Got Me" gave lie to that jibe.

For his two encores Davies chose the wonderful "Waterloo Sunset," and then came back once more to close with "Lola."