Columbia, S.C. — If you're one of the masses of Muggles counting the days until Nov. 16, when the "Harry Potter" movie comes to a theater near you, then read on ï¿½ if you dare.

Thursday, a special sneak screening of "Harry Potter & The Scorcerer's Stone" was given in Charlotte, N.C., for theater staff only. 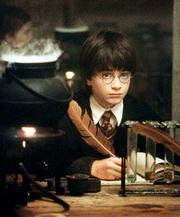 Actor Daniel Radcliff stars in the Warner Bros. film "Harry Potter and the Sorcerer's Stone." Based on the opening book of J.K. Rowling's fantasy phenomenon, the movie will be released next month.

Maria Caldwell, general manager of a cineplex in Columbia, was there. A film buff, mother of four and an avid reader of J.K. Rowling's magical books, Caldwell was excited about the preview.

"I'm so glad I got to see the movie ï¿½ it will help me be prepared for any questions or concerns from my patrons ï¿½ and I just love Harry Potter," she said.

Caldwell is busy preparing for sell-out crowds and a run on advance ticket sales, but she took time out to give us the scoop on the boy wizard and his magical world. Here are ï¿½ a few of the high points:

Does the movie stick to the book's plot?

"I can't remember anything in the movie that wasn't in the book. It follows the plot closely, and there is nothing out of order," Caldwell said.

ï¿½ The brick-wall entrance to Diagon Alley ï¿½ where the bricks move and shift like puzzle pieces to reveal the secret gateway, where Harry purchases his wand, owl and other school supplies.

ï¿½ The Invisibility Cloak, a plain fabric cloak that makes Harry invisible when he puts it on. You can see it drape around him ï¿½ especially when it reveals his hand or face.

What about the scare factor?

"I think it's best for kids who are 8 and up ï¿½ it would probably be too scary for children younger than 7 or 8," Caldwell said.

The dark forest was the scariest part ï¿½ for one, the scene was fairly long and the music added to the eeriness. Seeing the black-hooded Voldemort drinking the unicorn's silvery blood might be a little much for little ones.

What about the length?

Caldwell said the film clocks in right at 2- 1/2 hours. "I don't think kids a whole lot younger than 7 could sit still during it," she said. "But I can't think of anything they could have cut from the movie to make it shorter."

Let's talk about the characters:

Harry Potter: "(Daniel Radcliffe) was great. I don't think Haley Joel Osment (once considered for the role) could have done it as well."

The Dursleys, Harry's aunt and uncle: "I didn't picture them like that ï¿½ I thought Mrs. Dursley would be more June Cleaver-ish," Caldwell said. Played by Fiona Shaw, Mrs. Dursley looks dowdy, harsh and a little too old.

Gamekeeper Rubeus Hagrid: "I thought they did a good job with him ï¿½ he just looked huge," Caldwell said. Everything about Hagrid (played by Robbie Coltrane) is huge ï¿½ his nose, his beard, his booming voice. Even when he stands by the portly Mr. Dursley, he looks gigantic.

Draco Malfoy: Malfoy, played by Tom Felton, is Harry's conniving classmate, who wastes no opportunity trying to cause trouble for the boy wizard. "He had such an evil sneer. I just wanted to slap that kid," Caldwell said.

Ron Weasley and Hermione Granger: Harry's friends at Hogwarts. "He was right on and she was good, too," Caldwell said.

By the way, how do you pronounce Hermione? "Her-miney."

What was your favorite creature?

"The goblins at Gringott's bank were the best ï¿½ you could tell they weren't computer-animated."

What about Hogwarts School of Witchcraft & Wizardry?

"The Great Hall was really impressive ï¿½ the way the food just appeared and the way the teachers' tables were set up ï¿½ it was neat."

A giant hat is perched on the head of all first-year Hogwarts students and it speaks to them, "sorting" each child into the proper house at Hogwarts ï¿½ Ravenclaw, Gryffindor, Hufflepuff or Slytherin. "The hat reminded me of Jabba the Hutt" from "Star Wars," Caldwell said.

Was the Quidditch match like you thought it would be?

Quidditch is the high-flying game played by the students at Hogwarts. "It was a lot for the eye to take in ï¿½ it was action-packed," Caldwell said. "I kept picturing a football field and it was different than that. But they pulled it off really well."

So how would you sum up "Harry Potter & The Scorcerer's Stone" ï¿½ the film?

"It was true to the book," Caldwell said. "The effects were well done and they looked realistic. It was a lot to take in visually, and I think people will come back more than once to see what they missed the first time. I really think my kids will like it ï¿½ four out of four stars."