Los Angeles — Fight made right for "The Musketeer," which parlayed its mix of traditional swashbuckling and Hong Kong action choreography into the top spot among the nation's movies.

The revisionist take on the Alexandre Dumas classic, "The Three Musketeers," took in $10.7 million on the first weekend of the fall film season, according to studio estimates Sunday. 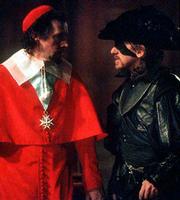 "Two Can Play that Game" opened in the No. 2 spot, raking in $8.3 million. The battle-of-the-sexes romantic comedy starring Vivica A. Fox and Morris Chestnut played on about half as many screens as "Musketeer" but scored a healthy $6,399 per-screen average.

The No. 3 movie ï¿½ the third debut among the top-12 grossing films ï¿½ was "Rock Star," starring Mark Wahlberg and Jennifer Aniston, with $6.2 million.

With film audiences shrinking on the first weekend following the Labor Day holiday, previous leader "Jeepers Creepers" dropped to No. 4 with $6.2 million. But in just two weeks, the horror flick has made $24.3 million, following a record debut for a Labor Day weekend opener.

"Soul Survivors" opened at No. 14 among films tracked by Exhibitor Relations Co. Inc., with $1.1 million in just 601 theaters.

"Our Lady of the Assassins," a gritty look at violence-racked Colombia, opened on four screens in Los Angeles and New York. It pulled in $55,044 for a strong per-screen average of $13,761.

"We're just very pleased ï¿½ this movie doesn't have any stars, and it's Spanish-language," said Eden Rosenfelt of Paramount Classics.

"Rush Hour 2," in the No. 6 spot, crossed the $200 million mark before the weekend to become New Line Cinema's top-grossing domestic release. The martial arts-buddy film starring Jackie Chan and Chris Tucker bested "Austin Powers: The Spy Who Shagged Me," to take that honor.

For the weekend, the top 12 films grossed an estimated $62.6 million ï¿½ an increase of 38.9 percent over the same weekend last year.

"That's huge," said Paul Dergarabedian, president of Exhibitor Relations. "For a lot of people who enjoy summer-style movies, summer's over, but action can still draw people in."

In the case of "Musketeer," starring Justin Chambers, the film's trailer played a big role in its popularity. The trailer ï¿½ which played up the film's mix of East-meets-West fight scenes ï¿½ ran before the popular "America Pie 2," which has grossed $131.2 million. "Pie 2" was seventh this weekend with $4.7 million.

Estimated ticket sales for Friday through Sunday at North American theaters, according to Exhibitor Relations. Final figures are to be released Monday.