Karole Armitage has danced around the globe since she left Lawrence at the age of 14. She has danced for George Balanchine and Merce Cunningham and created movements for Mikhail Baryshnikov, Michael Jackson and Madonna. She wears her moniker, "the punk ballerina," with pride.

Since Sept. 6, Armitage ï¿½ spike-haired and in her mid-40s ï¿½ has been in Lawrence working with Kansas University dance students to create a commissioned work for the music of Philip Glass. She describes her visit here as "down time," allowing her to step back from her exhausting schedule of commuting between New York City and Europe and to spend time with her parents, Katie and Kenneth Armitage. 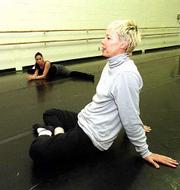 Karole Armitage, who grew up in Lawrence, has been serving as a guest choreographer for the Kansas University dance program the past couple of weeks.

She has four words for young people thinking about making dance their career.

"New York City used to be the dance center of the world," she said, explaining that the city use to have cheap housing and a subculture of artists who supported each other. "The values now are more corporate. It's about money and celebrity. ï¿½ If I didn't have Europe, where art is funded, I couldn't make it."

Armitage's training began unlike most little girls in Kansas. At age 5, she started studying with Tomi Wortham, a former member of the New York City Ballet.

"She taught Balanchine ballets for her recitals," she recalled.

By the time she was old enough to enter high school, Armitage was studying at the North Carolina School of the Arts, the School of American Ballet and the London Dance Center. And when other girls her age were thinking about moving away from home to go to college, she was boarding a plane to dance with Grand Theatre de Geneve in Switzerland, a company directed by Balanchine and Patricia Neary.

"Balanchine was the family I grew up in," she said. "When he was in anguish because (dancer) Suzanne Farrell got married, he took a select group of students to Geneva. I was 18 at the time.

"I loved doing his modern ballets best," Armitage continued, adding that she could never see herself wearing a tutu and taking the royal stance required of most traditional ballet dancers.

"I was five years with (Cunningham), and I got bored with him," she said, explaining that his works are too similar to each other. "He was intellectually stimulating for a while. ï¿½ So I had to make a choice. I thought I'd go off and be an artist. Little did I know."

In the early 1980s, Armitage established her own dance company, Armitage Gone! Dance.

"Punk was exploding. It was very much about reconfiguring the classical tradition," she said. "Some people thought I was destroying (dance); others thought I was doing something new and bold. Europeans are more confident with art evolving and art's need to reflect the world around them. It's fragile in America. Because there's not a (centuries-old artistic tradition as in Europe), it makes (Americans) nervous."

Eight years later, Armitage's troupe disbanded and she began lining up free-lance jobs with the Paris Opera Ballet and other major companies.

"I rediscovered ballet and became enamored with it. I went back to ballet's roots and explored contemporary ballet, which has modern influences and communicates in a rich, human way with emotional language," she said.

Armitage also had a few flings with the pop world, working on the "Vogue" video with Madonna and the "In the Closet" video with Michael Jackson.

"It was all about creating an image, a tool for them to sell their image," she said.

For Jackson, that meant portraying him as "heterosexual and sexy." For Madonna, it was about maintaining her star status.

In 1995, Armitage became director of MaggioDanza de Firenze, a ballet company in Florence, Italy. She then returned to New York City to create a work for Mikhail Baryshnikov's White Oak Dance Project. Although Baryshnikov was as much a star as Madonna or Michael Jackson, she found him quite different.

"Misha is on a different level. He has the most brilliant technique ï¿½ and he's penetrating psychologically," she said.

About a year ago, she became resident choreographer for Ballet de Lorraine in Nancy, France. She continues to create works for the Florence ballet and every couple of years revives Armitage Gone! Dance for a performance.

Armitage has plenty on her plate. For the Ballet de Lorraine, she is directing the Bela Bartok's opera, "Bluebeard's Castle" and is working on Jean-Philippe Rameau's "Pygmalion," which will feature sets designed by James Ivory, director of such films as "Howard's End" and "A Room With a View."

In Florence, she is choreographing a work based on Machiavelli's "The Prince." And she is creating "Rave," a work she describes as being like an Andy Warhol silk-screen.

"Dancers are in line doing a particular movement with slight variations," she said. "It's repetitive, but they're all different. It's a hypnotic experience."

Armitage said stress and continued controversy over her work is what keeps her going.