Gina Westergard doesn't show her jewelry and metal pieces very often in Lawrence, but an innovative art show and sale that opens Saturday at Fields Gallery has drawn her in.

Westergard is among the more than 50 artists who have been selected for the Lawrence Own-Your-Own Art Exhibition and Sale (LOYO), an event developed by the Lawrence Committee for the Advancement of the Visual Arts. LCAVA is a volunteer group that works to develop the local visual artist community through the exhibition and sale of the artists' works. 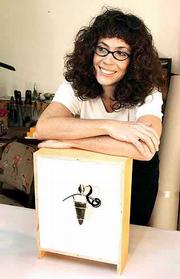 Gina Westergard, a Lawrence jeweler and metalsmith, is among the artists showing their work in the Lawrence Own-Your-Own Exhibition and Sale.

"There's a lot of practicing, professional artists who aren't exhibiting in Lawrence," she said. "Some artists have a specific audience and target, and it's outside of Lawrence. I'm hoping the show will bring more of an audience here."

Westergard will be showing three pieces that represent the transition her work has gone through over the past 10 years. She moved to Lawrence in 1994 from Long Beach, Calif., to take a position teaching jewelry, metalsmithing and enameling at Kansas University.

A decade ago, Westergard was doing sculptural stands with jewelry pieces that could be removed from the stand and worn as pendants. The pieces typically had some component of discovery, such as a bright stone set on the underneath side of a necklace or elements that move.

A short time after she moved to Lawrence, she discovered that its residents didn't wear much jewelry so she started creating containers, such as perfume decanters. She often mixes rubber, fur, paint, taxidermy glass eyes or hair with highly polished metal forms.

"They have some elements of function, but primarily the purpose is sculptural," she said.

From there, Westergard began hammering metal sheets to a desired texture. She adds paint to the surface of the metal and then combines the object with glass bases to create "a vessel within a vessel." Today, she is drawn to creating 3- to 4-foot metal conical forms.

"There's a sense of detail, fine craftsmanship, and they are very labor intensive," she said, adding that some of the pieces take several months to finish.

Diana Dunkley, a Lawrence artist and one of LOYO's organizers, said the exhibition and sale includes 151 pieces that are diverse in subject, media, size and price.

"A number of works were good, and we had over 400 slides to be juried," she said. "They include utilitarian ceramics, contemporary figure work, sculpture, paintings, photography. The works range from regional representational to contemporary work."

Dunkley said the exhibition and sale is a charitable fund-raiser for the Bert Nash Community Mental Health Center. Businesses and individuals have donated more than $10,000 in cash and in-kind services.

"This has allowed the exhibition to occur at no expense to the participating artists, except for the generation of their slides and work," she said.

Dunkley said $1,050 in cash awards and an estimated $5,000 in purchase awards will be presented.