Comedian Bill Hicks is given a proper tribute with 'Philosophy'

"I was over in Australia during Easter. It's interesting to note they celebrate Easter the same way we do, commemorating the death and resurrection of Jesus by telling our children a giant bunny rabbit left chocolate eggs in the night ... Why those two things? Why not goldfish left Lincoln Logs in your sock drawer.

"'(In Australian accent) Mummy, I woke up today and there was a Lincoln Log in me sock drawer.' 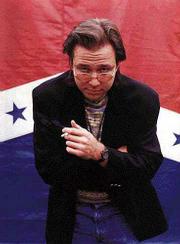 Comedian Bill Hicks died of pancreatic cancer in 1994 at the age of 32. With the exception of Lenny Bruce ï¿½ to whom Hicks often drew comparisons ï¿½ there's never been a comic more versed at being socially and politically risky without sacrificing the ability to make people laugh.

Part warrior conducting a bitter crusade on ignorance, part being of "higher consciousness" forever preaching his version of spirituality, Hicks was a complicated figure. While adamantly liberal on social issues (abortion, gun control, drugs), he was equally intolerant with other subjects. His scathing routines "Your Children Aren't Special" and "The Sanctity of Life" are among the most callous ever recorded, and they appropriately conclude the splendid new retrospective "Philosophy: The Best of Bill Hicks."

One drawback with Hicks' body of work is that, until now, there wasn't a singular recording that could act as a worthy introduction to the man. His 1990 album "Dangerous" and its 1992 follow-up "Relentless" are classics, but they're weighted heavily toward topical humor. ("Relentless" kicks off with a riff on the Clarence Thomas hearings before segueing into Desert Storm material.) His later records, "Arizona Bay" and "Rant in E-Minor," were cobbled together three years after his death. While containing some premium bits that weren't quite so topically focused, the posthumous collections don't maintain the cohesion of his proper records.

"Philosophy" is that rare "best of" compilation that truly assembles an artist's finest work. Both in selection of material and the order it is presented, the 21-track CD acts as a fitting tribute to an entertainer who was always waging a war on complacency.

"Greetings" opens the disc with a sarcastic barb that seemed to have a bit of mean-spirited truth in its delivery: "You gotta bear with me," he tells the audience while taking the stage. "I'm very tired of traveling. I'm very tired of doing comedy. I'm very tired of staring out at your vacant faces looking back at me, wanting me to fill your empty lives with humor you couldn't possibly think of yourselves."

With an arrant Southern drawl (Hicks was born in Georgia but raised in Texas) that seemed to thicken as he became more intense, the humorist invariably found a way to push an audience to the edge of resentment while simultaneously winning them over. "I'll show you politics in America," he begins on the album's briefest track.

"(First voice) 'I think the puppet on the right shares my beliefs.'

"(Second voice) 'I think the puppet on the left is more to my liking.'

"Hey, wait a minute. There's one guy holding up both puppets.

"(Booming loudspeaker voice) 'Shut up. Go back to bed America, your government is in control. Here's "Love Connection," watch this and get fat and stupid. By the way, keep drinking beer you (expletive) morons.'"

Like the venerated Bruce or Richard Pryor, Hicks was the type of comedian with whom others in his profession found themselves in awe. Inevitably, it was this balancing act between being fearless and hilarious that also got him in constant trouble. Hicks was the first comedian to do a nationally televised routine on the Gulf War at the height of the nation's jingoistic fervor ï¿½ which drew considerable resentment at the time from many in the country.

But one controversial event seemed to define the man. On an Oct. 1, 1993, broadcast of "The Late Show With David Letterman," Hicks' twelfth appearance on the program was stricken after CBS executives concluded his material was "unsuitable."

The affair brought Hicks considerable press, but the banished routine (much of which is sprinkled throughout "Philosophy") never aired. And for Hicks, it marked his last appearance on late night television.

In an interview following the incident, he told The New Yorker, "To me, the comic is the guy who says 'Wait a minute' as the consensus forms. He's the antithesis of the mob mentality. The comic is a flame-like Shiva the Destroyer, toppling idols no matter what they are."

Less than four months later, Hicks was dead ï¿½ killed by a disease with which he had just been diagnosed.

"Philosophy: The Best of Bill Hicks" serves as a time capsule from a four-year span of his lifetime. If it seems in any way deficient in fully capturing the man, it is only because his career was incomplete ï¿½ there's the lingering sense that Hicks was still honing his formidable abilities.

How interesting it would have been to see the late comic put his spin on the dark events of our recent past. It's easy to envision Hicks immediately concocting a witty, angry, truthful and certainly unique view of the proceedings. The nation could use what he had to say.