Longtime KU band director to step off the field, will remain teaching

Robert Foster may be stepping down as director of bands at Kansas University, but he is not putting his baton to rest.

He will continue to conduct and teach. 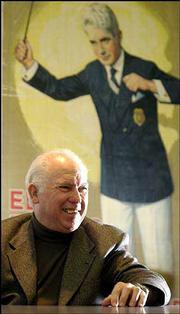 After 31 years, Robert Foster is ending his run as director of bands at Kansas University. He will continue to teach music classes at KU and conduct the Lawrence City Band.

"I am not retiring," said Foster, who has been at KU for 31 years. "I will continue to teach music education classes and be part of the faculty and community. I will still do (Lawrence) City Band on Wednesdays and Summer Concert Band on Tuesdays."

The change in Foster's duties will take place at the end of this semester. John Lynch, who teaches at Northwestern University in Evanston, Ill., is expected to step into the director of bands' shoes.

Foster grew up in Texas in a family that valued music. His father was a high school band and choir director.

When he arrived at the University of Florida, there were 120 students in the band and he had two trumpet students. When he left, the band had 240 members and his trumpet student roster had climbed to 27.

"I came to KU from a larger band program," he said.

Foster remembers what the KU band program was like when he arrived on the Hill: a 120-piece all-male marching band, a symphonic band that met only in the spring, a concert band that began after the football season and a men's basketball band.

Today there are three concert bands, a marching band, a wind ensemble, three large jazz ensembles, seven jazz combos, men's and women's basketball bands and other groups. The bands are made up of music and nonmusic majors.

Foster said his first goals at KU were to build a college band program with a large marching band and concert band; to establish a jazz program that would prepare students to get jobs as musicians; and to foster higher-quality performances by the bands.

"If you count the pep bands and basketball bands, the students do over 120 performances in nine months," he said.

Thomas Stidham, KU associate director of bands, was introduced to Foster in 1964, when he was a graduate assistant and Foster was a music professor at the University of Florida.

"I can't say how much he's meant to me and this (KU) program," Stidham said. "I think where this program was ï¿½ the successes he's guided us through are sensational. The general overall leadership he had was a guiding light in all of this, and he has had a vision in where he wanted us to go."

Foster said he has many fond memories from his three decades as director of bands, including five trips to football bowl games, a trip to the 1988 Final Four basketball tournament and tours to Japan, Amsterdam and London.

"We've had some great halftime shows," he said, recalling when Baby Jay was hatched from a huge blue egg 30 years ago on the football field in Memorial Stadium. "And we've had some appearances with great artists."

Foster said he understands the all-consuming commitment that KU basketball coach Roy Williams has for his program because he felt a similar dedication to the university's band program.

"The commitment I've had to the KU bands is like being married," he said. "It's a matter of working on it seven days a week, from the time you wake up to the time you go to bed. You can't function on the highest level without that kind of commitment."

Like with his own father, Foster's love of music has rubbed off on his children. Rob plays trumpet and is director of bands at Haskell Indian Nations University and Eudora High School. Randy, a senior at KU, is a mobile DJ and plays trumpet. Becky, who lives in St. Louis and works as a designer for an architecture company, plays the oboe.

"If anyone wants to measure the last 30 years," Foster said, "I hope they measure the good things that happened."