On the narrative for a handcrafted rocking chair in the Lawrence Art Auction, artist Will Orvedal says the piece was inspired by the rocking of his boat while he fished in the Wakarusa River.

In reality, what prompted Orvedal to create the masterpiece was the design and construction challenges it provided. 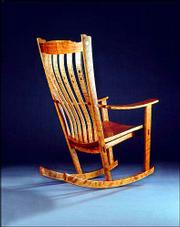 "Wakarusa," a rocking chair by Will Orvedal, is the featured work at this year's Lawrence Art Auction, a benefit for the Lawrence Arts Center.

The chair made of curly cherry and curly maple incorporates steam bending, bent lamination, coopering, hand shaping, joinery and compound angles. Its value is listed at $3,000.

"What's interesting and challenging about the chair is the large number of techniques (it uses)," Orvedal said, before describing how he "cooked" the wooden slats for the chair back in a steam box to make them limp enough to bend and how he clamped and glued thin pieces of wood to make the arms and crest rail.

"I learn from my mistakes," he said. "I like to invent the process more than I like the finished project. The doing is what's important to me. The fun is in the making of it and figuring out how to make it."

Orvedal has donated to the Lawrence Art Auction nearly every year since its inception 22 years ago. This year, more than 175 artists have donated works to the auction, up from last year's total of 159.

"The average retail value is up, and the number of artists is up," said Rick Mitchell, gallery director at the arts center. 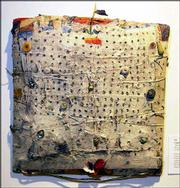 In addition, the auction has attracted artists who have never donated to the event before. Among the new contributors are Sandy Merrifield, polaroid transfer; Ronald Michael, embossed print; Eva Bowerman, photography; and John Hess, photography.

"The artists who contribute have the option of getting one-third of the sale price back to help with expenses," Mitchell said.

Half of the artworks will be sold at the live auction and the other half will be in the silent auction, which is under way now and will run through Saturday. The live auction, conducted by auctioneer Kasey Wold, will begin at 8 p.m. and is expected to last about 2 1/2 hours.

The event will be catered by Cork & Barrel Wine and Spirits and Hy-Vee.

"The money will help the us do exhibits," Mitchell said. "It's the main income source for the gallery program at the arts center."

Click the Play control button to begin the clip.If you have trouble viewing this video clip you may have to download Quicktime