New York exhibit largest, most comprehensive ever of surrealist's art

New York — A white, round moon with a pensive face floats in deep blue water, surrounded by lush green mountains and a soothing blue and teal sky.

"Luna a la Calanque de Culip" ("Moon Over Culip Cove"), an oil on wood board landscape, was painted around 1914 by a young Salvador Dali, who was perhaps only 10 at the time. The work reveals the artist's early feel for surrealism. 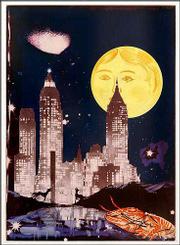 An original watercolor of the Manhattan skyline at night is part of the "Dali in Manhattan" exhibit now showing in New York. More than 500 works owned by or loaned to Los Angeles gallery owner Bruce Hochman, including sculpture, several paintings, lithographs, etchings and engravings, are on exhibit and for sale during a two-week period.

Such misplaced moons reappear ï¿½ with or without faces ï¿½ as prominent images throughout the prolific master surrealist's body of work, which includes more than 300 oil paintings, 1,100 drawings and 1,700 graphic works created over seven decades.

Some 565 works ï¿½ and about 1,100 pieces of memorabilia ï¿½ are on display at the Metropolitan Pavilion.

"Dali in Manhattan," which opened last week and runs through May 1, is the largest and most comprehensive exhibit of Dali's work ever, said Los Angeles gallery director Bruce Hochman.

"People should come and look at his work and know they are looking at possibly the greatest genius of mankind," he said.

Hochman, a native New Yorker, said he plans to donate a portion of the proceeds to families of victims of the Sept. 11 attacks.

"The money will go directly to families of victims and firefighters and at the same time bring a wonderful venue for people to see," he said.

A large cotton tapestry based on Dali's best-known painting, "The Persistence of Memory," is framed by an ornate oval with crowns and vines. The surreal landscape features three melting clocks ï¿½ one folded over on a bare tree limb.

The distorted clocks ï¿½ classic Dali symbols ï¿½ are featured in many works, including several bronze and cast bronze sculptures that often borrow and mix images from his paintings.

"Cabinet Anthropomorphique," an imposing bronze sculpture of a man with a torso of cabinet drawers and leaning on one leg and one hand, weighs 566 pounds and measures 82 inches across. Long, wavy tresses fall over his face and spill over two of the open drawers. In smaller sculptures, tiny drawers open and close, inviting the viewer to interact with the art.

Dali's playfulness is apparent even in a 1950 oil-on-canvas portrait, "Mrs. Bryce," commissioned by a New York City socialite. The detailed profile of the blond woman clad in an emerald dress and bedecked with jewels stands out against the landscape. In the background, one in a line of trees leaps up out of the ground.

The artist's self-promotion and ego are obvious even in postcards he made for relatives when he was a boy. By signing the drawings on the cards, Dali may have foretold his own rise to fame.

"Postcard to Uncle Anselmo," a pen and ink drawing from 1915, depicts two creatures ï¿½ they appear to be a hybrid of a pig, bear and wolf ï¿½ writing letters and dripping ink on a table. Dali's elaborate calligraphy seems sophisticated for a child.

One of Dali's earliest works, a small realistic watercolor of a rural scene using tiny, precise brushstrokes, was painted when he about 8.

By the time he died in 1989 in Figueres, Spain, where he had been born in 1904, he had dabbled in art criticism, book writing, filmmaking, film set design and jewelry design.

Criticized by some contemporaries for being too commercial, Dali earned millions with his various projects and left an estate of more than $85 million. He outlived many of his peers, including Pablo Picasso and Joan Miro, and he influenced a new group of artists, including pop icon Andy Warhol.

Still, Dali's popularity has never faltered, and Hochman expects the show to draw about 40,000 people.

Last year, about 26,000 attended a 12-day exhibit at the University of California, Los Angeles, where Hochman displayed 500 of the same works. "Dali at UCLA" followed the success of a smaller show a year earlier at the Las Vegas Museum of Art.

The current New York show coincides with a major Dali exhibit in China, which will run for more than a year, Hochman said.

The Salvador Dali Museum in St. Petersburg, Fla., is permanent home of the most comprehensive collection of Dali's works, including 94 original oils, more than 100 watercolors, about 1,300 graphics, sculptures, objets d'art, photographs and an extensive library.