New York — The Yiddish Radio Project, a 10-part series now airing on National Public Radio, was meant to be a sometimes funny, sometimes heartbreaking glimpse of an immigrant community at its peak.

But after violence erupted in the Middle East, the program featuring gems of Yiddish radio from the 1930s to 1950s is attracting anti-Semitic e-mails from listeners of NPR's 700 member stations. 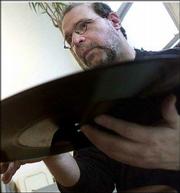 "The vituperative nature of some of the e-mail caught everyone off guard," said Henry Sapoznik, co-producer of the series. "Some of it is what I call good old-fashioned nativist American anti-Semitism."

Jeffrey Dvorkin, ombudsman for NPR, added: "What happens in the Middle East always evokes strong emotions from people, but this time has been quite unexpected for me."

The series, which started March 19, airs Tuesday evenings on "All Things Considered."

About half of the 300 letters NPR had received were negative ï¿½ and half of those were "blatantly anti-Semitic," Dvorkin said Tuesday.


The number of negative letters was about average for a series, but the tone was unusual.

"A lot of it is the 'Jews control the media' and 'Who's really paying for this?' type of thing," he said. "Then there's a whole bunch of stuff that's predicated on the turmoil in the Middle East."

For instance, one person wrote: "How do you say bloody Israeli storm troopers in Yiddish?" Sapoznik said.

"Who in their right mind is going to conflate a program about Yiddish-speaking Jews from New York in the 1930s and Israeli soldiers today?" Sapoznik asked. "If this was a series on Delta blues and there was turmoil in Mogadishu or Rwanda, no one would confuse American blacks from the Delta with warlords in Africa."

NPR was also criticized by some who said the network's news coverage of the Middle East is biased toward Palestinians. They accused NPR of using the Yiddish radio series to placate Jewish listeners.


The Yiddish Radio Project airs between 3 p.m. and 6 p.m. Tuesdays on KANU-FM 91.5.Neither Rob Klotz, local host of "All Things Considered," nor Darrell Brogdon, KANU program director, have received negative responses to the series. On the contrary, Brogdon says, "We've gotten positive reaction."