Companies across America aim to build audiences with new marketing

Philadelphia — Think of ballet, and the first things that likely pop to mind are tutus, toe shoes and maybe a sugarplum fairy or two.

But the Pennsylvania Ballet is taking steps to get across the message that under those sparkly tights are the souls ï¿½ and sinew ï¿½ of athletes who are strong, tough ... and, yes, sexy. 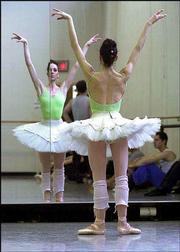 Black-and-white billboards going up throughout Philadelphia show the dancers' buff, sometimes airborne, bods with headlines like "Not all Flyers wear skates" ï¿½ a nod to the city's hockey team ï¿½ and "An athlete by definition" showing a dancer in a pose that flaunts her muscular back and arms.

Welcome to the new world of ballet, where companies across the nation are employing edgy programs and clever marketing to reach out to younger audiences who see the art form as esoteric and just plain stuffy.

"While we're grateful for our loyal subscribers, we're trying to expand and bring in new people," said Shawn Stone, director of marketing for the Pennsylvania Ballet, where the average ticket holder is 49 and female.

There's also a new program geared toward 19- to 32-year-olds called Thursday Night Jumps. It offers ticket discounts and a "dance card" for subscribers ï¿½ an invitation to attend Thursday night post-performance parties, where young ballet-goers can drink, eat and mingle with dancers.

"We wanted to reach the younger generation that grew up with the Nutcrackers and the Swan Lakes of the world and who say, 'Ballet has no relevance to my life,"' said Alvin Henry, marketing and public relations director for the San Francisco Ballet, which launched its own youth-market spin a year ago.


"The idea was to present the ballet in a new and different way, to make those people say, 'Maybe I should take a second look at this,'" he said.

In its ad campaign, the San Francisco Ballet promoted the cutting-edge dance "Black Cake" with embracing black-clad dancers atop a black wedding cake above the slogan "White Is for Virgins." For a lightning-paced piece called "The Vertiginous Thrill of Exactitude," two dancers were shown smooching in the back of a speeding convertible.

But how can ballets appeal to twentysomething sensibilities without alienating older aficionados? In San Francisco, the marketing shift was first explained in letters to subscribers.

"We told them, 'We're launching this campaign and we will not ignore you, but we're trying to get a new audience into the house,'" Henry said. "They understand they're not going to be around forever; they want to see new people coming in."

New York City Ballet's marketing campaign has employed several fine art photographers for the past several seasons to photograph the costumed dancers in eye-catching locations, from a rock outcropping along Riverside Drive to the concrete canyons of Wall Street.

In the past year, San Francisco Ballet subscribers have risen from 15,000 to 17,000 and single-ticket sales ï¿½ the focus of the campaign ï¿½ are up too, Henry said. The average subscriber was in his or her 50s, he said, and officials are looking at whether that has changed.