Effective communication can be an elusive art.

Even those who have mastered it sometimes find themselves fumbling to recover their skills in especially intense situations. 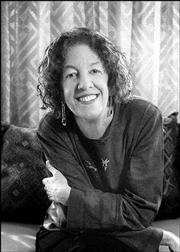 Photo Special to the Journal-World

Harriet Lerner says her latest book, "Dance of Connection," was inspired by her father. The Topeka author will discuss her work at 7 p.m. Wednesday in Lawrence.

"No matter how mature we are and how well we communicate, we all have some relationships where a fog descends on our brain and reduces our thinking center to the size of a pinto bean," said Harriet Lerner, a Topeka author and expert on women and family issues.

Lerner's latest book, "The Dance of Connection: How to Talk to Someone When You're Mad, Hurt, Scared, Frustrated, Insulted, Betrayed or Desperate," seeks to provide people with the tools they need to communicate with difficult people in their lives and navigate their most important relationships.

Lerner, a clinical psychologist in private practice in Topeka, will share the secrets she reveals in her book during a talk this week at the Lawrence Arts Center, 940 N.H.

But neither Lerner's talk or her book are directed exclusively at women.

"I hope men especially will feel welcome," Lerner said. "The issue of finding voice is not just a women's issue. It is an equal opportunity employer."

In fact, Lerner said it was her father who inspired "Dance of Connection." After his death in 1997, she realized how much his life had influenced her work.

"He inspired me not only by being a gifted speaker and a wonderful storyteller, but paradoxically, he inspired me most by the fact that when it mattered, he could not speak up at all," Lerner said. "So my father, who was so good with words, was also terrified of them."

Although Lerner's talk and book are intended to help people conquer their communication fears, she doesn't advise nitpicking every situation that comes along.

"It can be a real act of maturity to let something go," she said. "But sometimes we do need to open the conversation to heal betrayals, inequalities and broken connections and to bring more of our full self into the relationship."

Lerner has written many books, including "The Dance of Anger," a New York Times best seller

"Harriet has always been a major speaker in relationship to women with regard to communication and family issues," she said. "We also wanted to support regional people who have done outstanding work."

The second lecture in the series is not finalized, but the 100 Good Women committee hopes to schedule two or three speakers per year.

The nonpolitical, nonprofit organization is composed of 135 women and men dedicated to promoting the spirit of altruism.

Its founding members came together more than 10 years ago, Stucky said, "because they felt that, given the way our culture has changed, issues people normally would take care of just by being good neighbors to each other would fall through the cracks."