From the wild side of Missouri

She was 7 or 8 at the time, here from Ohio to visit her grandparents, Geraldine and the late Fred C. Lee. 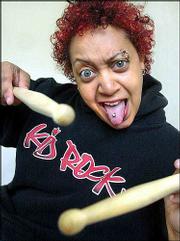 Stefanie Eulinberg bought her first guitar at a music store in Cape Girardeau when she was 7 or 8 while visiting her grandparents, Geraldine and the late Fred C. Lee. Now 34, Eulinberg plays drums for rock band Kid Rock.

Now 34, Eulinberg plays drums for one of the most popular and notorious acts in rock 'n' roll, Kid Rock. His testosterone-drunk band is powered by a 5-foot-tall woman known for skillfully beating her drums into submission every night.

Kid Rock told her she got the job because she doesn't play drums like a girl.

But Eulinberg does come back to Cape Girardeau when she can to see her stepmother and father, Bonnie and Irvin Eulinberg, and her grandmother. She squeezed in a Cape Girardeau visit between the band's concerts recently.

Eulinberg spent the early part of her musical career aboard cruise ships and in hotel lounges playing pop in cover bands, but she was playing guitar and singing in a Milwaukee punk band called Puppy Steak when Kid Rock found her. He was putting together a band that was also a bit of a sideshow. It included a dwarf.

Eulinberg was hired "because I'm a chick drummer that can rock," she says.

She is one of only a few women drummers in rock 'n' roll playing at the highest level, the others including Samantha Maloney of the bands Hole and Motley Crue and Cindy Blackman, who plays with Lennie Kravitz. Eulinberg also writes theme songs for Walt Disney Studios.

Her father didn't know who Kid Rock was when she started playing for him. He now knows the man has a reputation for debauchery and writes songs that shock some people but says, "That's all show."

"... He's a very nice fellow. He has respect for all his band members, and they work together like a family."

The Cape Girardeau plumbing contractor and his wife like that. "She's the only girl in the group, and they look out for her," Irvin Eulinberg says.

If his daughter needs any looking out for, she doesn't show it.

"Anybody who wants to challenge me, I'll take them on right there," she says. "If you want to talk junk, get behind the drum set."

Eulinberg's mother has claimed she was beating on pots and pans when she was still a baby. She played the cornet in her high school band and guitar and drums on the side.

Afterward, she took any music job she could find. "As long as I didn't have to punch in, I'd do it," she says.

She likes her rock 'n' roll life. "It's amazing. I will be able to do things most people will not in their lifetime: Fly in a private jet, playing shows like the Grammys," she says.

But it's not as glamorous and beautiful as it looks. "We miss our families and dogs and kids," she says. "... Mostly we're just living out of a suitcase."

But Kid Rock, whose real name is Bob Ritchie, grew up in a well-off Detroit suburb. He moved to the ghetto to become a rapper. Everybody in the band calls him Bob.

"If I had to call him Kid Rock I'd kill myself," she says.