Kansas City, Mo. — When Christopher King signed on to direct Minds Eye Theatre's production of "The Rocky Horror Show," he wanted to update the feel of the rock 'n' roll musical.

He realized that most folks became familiar with "Rocky Horror" through the 1975 cult movie, where Tim Curry plays the strutting transsexual Dr. Frank n Furter. Once sexually provocative, in today's world of Britney Spears and Howard Stern, the movie seems rather tame. 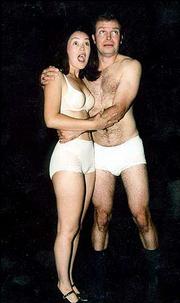 "I remember it ('Rocky Horror') in the '80s, and it was crazy, wonderful and dirty," King said. "Now they show it on MTV. I want to bring (the play) back to that same kind of (shocking) feeling. It's essential to the meaning and feeling of the show."

"The Rocky Horror Show," written by Brit Richard O'Brien, is about a young American couple, Brad Majors and Janet Weiss, who are stranded on a deserted highway when a tire blows out of their car on a rainy November night. They walk to a nearby castle to get help, and enter the world of Dr. Frank n Furter, an alien scientist from Transsexual Transylvania who is unveiling his greatest creation, a blonde muscle-bound Rocky Horror.

"There's a character in 'Rocky Horror' that everyone can relate to," said Aaron Tracy, a Kansas City, Kan., actor-singer who plays Dr. Frank n Furter. "It's about sexual discovery, and that if someone is different it does not make them wrong. They're just someone you're not used to."

"If you're thinking of bringing the children, don't," he warned.

More than half of the play's cast is from Lawrence. At a recent rehearsal, they donned high-heeled platform shoes and did the hip-thrusting Time Warp as a three-piece band tightened up its playing.

"On a superficial level, the music is a lot of fun to sing and listen to," said Philip Denton, Lawrence, musical director and understudy for Brad. "On a serious level, the themes are on self-discovery and not taking what people tell you (as the truth)."

Cynthia Dahlberg, Lawrence, has designed the set and plays Eddie and Dr. Scott. She remembers going to see "The Rocky Horror Picture Show" at the old Hillcrest Theater in Lawrence when she was in high school and college.

She is not surprised by the ongoing popularity of the movie and play. Neither is King.

"Although it is campy ï¿½ it's about what it means to be different and alone in the world. (Audiences) connect with the idea of being an outsider," King said. "There's been a revival in camp. Since Sept. 11, people are reaching out for something. They don't need hardcore reality. Fantasy is in at the box office. People need a fantasy."