Lisa Marie, Nicolas say 'I do'

The couple recited wedding vows Saturday evening at the Mauna Lani Bay Hotel and Bungalows on the Big Island of Hawaii, Cage spokeswoman Annett Wolf and Presley spokesman Paul Block said. Cage is 38, and Presley is 34. 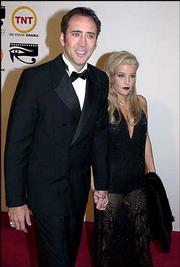 This is Presley's third wedding; she was married previously to musician Danny Keough and pop star Michael Jackson. It was the second marriage for Cage, who divorced actress Patricia Arquette in 2000. They had no children.

"The wedding was in front of immediate family and friends," Block said, including the bride's mother, Priscilla Presley, Lisa Marie's children ï¿½ Danielle, 13, and Benjamin, 10, from her marriage to Keough ï¿½ and Cage's 12-year-old son, Weston, from a previous relationship.

There were no other details.

Lisa Marie Presley is the only child of Priscilla Presley and Elvis, who died 25 years ago this week.

The couple returned to Los Angeles on Sunday. Wolf said Cage was back at work Monday filming his latest movie, "Matchstick Men," which Ridley Scott is directing.

Asked about a honeymoon, Block and Wolf said they "know of no other plans."

Cage won a best-actor Academy Award for 1995's "Leaving Las Vegas," and starred in this year's "Windtalkers." His other recent movies include "Captain Corelli's Mandolin," "The Family Man" and "Gone in 60 Seconds."