Falling for The Calling

Friday night's appearance by heartthrob rockers The Calling was meant to be the last of Pipeline Productions' shows at Lawrence's Granada Theatre, but it was moved to The Bottleneck, leaving the Granada without a swan song.

The Calling performed before devoted fans Friday night at the Bottleneck in Lawrence, Kan.

In the tradition of Bush's Gavin Rossdale and Goo Goo Dolls' John Rzeznik, Alex Band is the focal point of The Calling. With an appealing baritone and cultivated good looks, he's the one fans come to see.

The Calling ï¿½ Band, Aaron Kamin and "Dino" on guitar, bassist Billy Mohler and drummer Nate Wood ï¿½ is riding the wave of the hit single "Wherever You Will Go."

Band and Kamin's songs are competent, unthreatening appeals for love and understanding and tales of heartache.

Their brief set clocked in at just an hour, including the two-song encore. The group played all but two of the songs from its debut release "Camino Palermo," and included a rather bland cover of U2's "One" and an unreleased song, "When It All Falls Down."

In a move that at first appeared to be a gimmick, for "Just That Good," the band's first encore, the musicians all traded instruments. Perhaps not surprisingly this led to the most interesting music of the show.

Relocating the concert to The Bottleneck because of Granada's remodeling might have been a blessing. A middling crowd of barely two-thirds of The Bottleneck's capacity would have been hard pressed to fill the dance floor at the Granada. 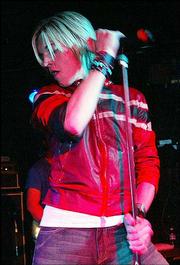 Alex Band of The Calling.