Washington — The Teddy bear, inspired by the helpless bear a president refused to shoot, turns 100 this fall, still fuzzy-eared, huggable and loved by millions of children around the world.

Theodore Roosevelt's Teddy bear is easily the most popular presidential memento ever and the centennial celebrations already have begun. 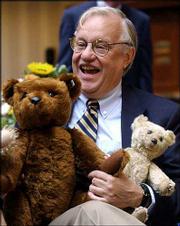 Tweed Roosevelt, great-grandson of President Theodore Roosevelt, takes part in Teddy Bear Expo in Washington, marking the 100th year of the Teddy Bear. Roosevelt Friday held an original bear made in 1904, right, and a reproduction of the first Teddy Bear, which was introduced in 1902.

Appearing Friday at the Doll and Teddy bear Expo here, Tweed Roosevelt, the 26th president's great-grandson, said Teddy bears had long been a part of childhood for young members of the Roosevelt family.

Roosevelt, 60, is a Boston investment banker and a spokesman for the Teddy bears produced by the Steiff Co., which has been making stuffed bears since 1903.

"I think that the Teddy bear has come to represent all that's good about humans," Roosevelt said. "For a child it is a confidant that's entirely on the child's side. It's an honor to the Roosevelt family that we had a part of giving to the world this symbol of joy and solace."

The Teddy bear's creation resulted from the accidental combination of a tethered bear in a Mississippi woods, news stories about the president's refusal to shoot it and a cartoonist's eye for an arresting image.

As the end of 1902 approached, Roosevelt had completed a busy and successful first year in office and Republicans had breezed through the November elections. The president decided he deserved a break and a bear hunt seemed made to order.

Soon Roosevelt was clambering down from a private car on a railway siding in Mississippi in leather leggings, a blue flannel shirt, corduroy jacket and hobnail boots. He had a cartridge belt at his waist, a hunting knife on his hip and a favorite, custom-made rifle under his arm.

The president was clearly ready. But the bears were not.

As biographer Edmund Morris records in "Theodore Rex," his account of the Roosevelt presidency, wherever an increasingly frustrated Roosevelt went in the deep woods the bears went elsewhere.

Finally, a pack of hunting dogs gave chase to a bear that lunged exhausted into a pond where a guide roped it and cracked it in the skull with a rifle butt.

The president was sent for. Here, finally, was a bear for him to shoot.

"He was both disappointed and upset, on reaching the pond, to find a stunned, bloody, mud-caked runt tied to a tree," Morris writes. "The bear was not much bigger than he. He refused to shoot. 'Put it out of its misery,' he said. Somebody dispatched it with a knife."

The hunt went on for three more days. Roosevelt never got a shot.

But back in Washington the newspaper stories of the president's sporting refusal to shoot a defenseless bear reached the desk of Clifford Berryman, then a cartoonist for The Washington Post.

Berryman sketched a small, bewildered, tethered bear, with the president turning away in disdain. The cartoon appeared Nov. 16 on the front page of the Post over the caption, "Drawing the Line in Mississippi."

A hit with the public

Berryman, whose cartooning career was to extend into the Truman administration, described the cartoon beast as "a poor measly little cub with most of its fur rubbed off and ears like prickly pears."

"We have all been delighted with the little bear cartoons," Roosevelt wrote Berryman on Dec. 29, 1902.

The president's delight was widely shared. Soon people on both sides of the Atlantic saw commercial possibilities in the little bears.

In New York City, Rose Michtom, the wife of Brooklyn candy store owner Morris Michtom, made two stuffed toy bears. Her husband put them in his window at $1.50 each with a sign calling them "Teddy's Bears." Soon the stuffed bears were selling so briskly that the Michtoms, both Russian immigrants, established the Ideal Toy Company to keep up with demand.

Meanwhile, in Germany, toy manufacturer Margarete Steiff had added plush, stuffed bear cubs to her line of stuffed elephants and other toy animals. Each had button eyes, long arms, movable joints and a distinctive button in an ear.

In 1904, the little bear became the mascot of Roosevelt's successful presidential campaign.

All of this had a touch of irony about it. The president disliked the nickname Teddy. Friends called him "Theodore."

But his fellow countrymen were far more informal. To them, the president was Teddy. And the little stuffed bear was "the Teddy bear."