Music may not be able to make sense of the senseless, but it can help heal the pain.

Jazz sax player and composer Bobby Watson was reminded of that truism a year ago after airplanes crashed into the World Trade Center and Pentagon. 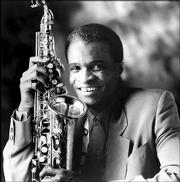 Jazz sax player and composer Bobby Watson will perform Sept. 9 at the Conservatory of Music at the University of Missouri-Kansas City. Watson attended Pinckney School for two years.

"I didn't consciously sit down and write something for 9-11," the Lawrence native said. "This mood came out, and I recognized what it was."

The result was "Landmarks Lost," an ode to the Twin Towers that is included on his latest CD, "Live and Learn."

Watson, director of the jazz studies program at the Conservatory of Music at the University of Missouri-Kansas City, and his wife, Pam, were packing for a trip to Milan, Italy, the morning of Sept. 11. It was their wedding anniversary, and Watson was going to perform at a stereo conference being sponsored by Red Records in the Italian city. They had tuned the television set to CNN, hoping to catch a weather report for Italy.

Watson remembers hearing the initial report of a plane hitting the World Trade Center, but continued to pack their bags and load them into their car. As they drove toward Kansas City International Airport, he received a call from a Conservatory staff member.

"She was calling to see where we were," he said. "We were on the road and by the time we got to the parking lot, the airport was shut down. At the terminals, everything was chaos, but we went ahead and booked tickets for the next day. But by the time we were back into the car, it was a whole other world."

Like most Americans, Watson began to realize the destruction and ramifications of the attacks as the day wore on.

"It made me think about other spots in the world like Bosnia, Israel or any of the trouble spots," he said. "Things are never the same again."

At the time, Watson was working on "Live and Learn" and was going into the studio nearly every day to record and work on the music. He sat down at the piano and his emotions began to surface.

"Landmarks Lost," a memorial to the fallen building, fits perfectly with the rest of the tunes on "Live and Learn," which include "Faith in Action," a tribute to drummer Art Blakey, "We Fall Down," a spiritual about personal resilience, and "River Jordan," a surging tune about expressing one's emotions freely.

"The record is a statement about priorities as you get older," Watson said. "A style and an identifiable sound is the most important thing to an artist."

Watson attended kindergarten and first grade at Pinckney School before his family moved to Bonner Springs and then Minneapolis, Minn. He began his musical career in the fifth grade, when he played "The Battle Hymn of the Republic" on clarinet at the Church of God in Christ in Olathe, where his grandfather was pastor. He took piano lessons and, at age 13, began playing the alto saxophone ï¿½ an instrument played by his father, James, at home and church.

He graduated from the University of Miami in 1975 and moved to New York City and eventually joined the ranks of Blakey's Jazz Messengers. He has played in a number of bands and worked with numerous jazz players, such as Panama Francis, Max Roach, Lou Rawls, Chaka Khan, Maynard Ferguson, Joe Williams and Wynton Marsalis. He composed the original music for "A Bronx Tale," Robert DeNiro's directorial film debut.

Two years ago, he signed on to teach at UMKC's Conservatory of Music and to direct its jazz studies program. He believes music ï¿½ and jazz in particular ï¿½ will play a key role in the nation's cultural development.

"Jazz was born in the 20th century and is an American product," he said. "It's the only original American art form.

"Musicians ï¿½ we're like the backdrop to life. Music is not always to listen to but has the power to get people to dance, to forget their problems. It's like what Art (Blakey) said, 'Music washes away the dust of everyday life.'"